Kizza Besigye vows to continue protests after release on bail 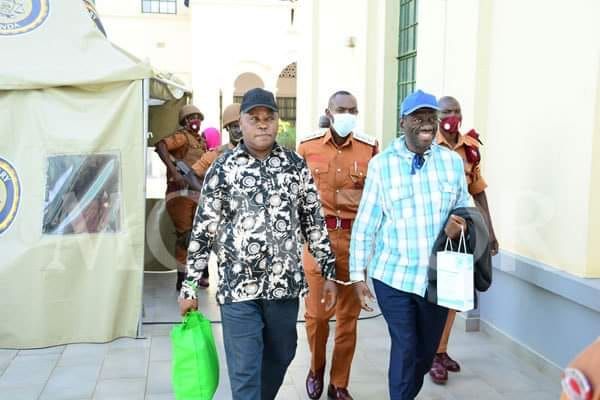 Besigye and Samuel Lubega Mukaaku out of jail

Veteran Ugandan opposition figure Kizza Besigye was defiant on Friday after being released on bail by a Kampala court.

“We are out of prison and we shall not turn back; we shall resume the Wake Up call campaign until everyone affected by the crisis is awake to do something”, he wrote in a Facebook post.

Besigye was released on Friday after two weeks in jail awaiting trial on charges of inciting violence.

The 66 year-old critic of President Yoweri Museveni was detained on June 14 in Kampala as he led protests against sky-rocketing consumer prices.

He was charged with inciting violence the following day.

His initial bail application made on the day he was charged was denied.

On Friday his lawyers applied for bail again and a magistrate agreed to release Besigye and fellow prisoner, Samuel Lubega Mukaaku.

The magistrate said he was “satisfied that the accused’s sureties are substantial”, according to a live video feed on Besigye’s Facebook account of the court proceedings.

He ordered Besigye to pay 2.5 million shillings ($665) bail cash as one of the conditions for his release.

He was ordered to appear in court again on July 29.

“We are out of prison and we shall not turn back; we shall resume the Wake Up call campaign until everyone affected by the crisis is awake to do something.

“The crisis we are fighting will intensifying (sic), so it’s our duty to end it, not those who created it.

“We are dealing with the crisis of misrule. That is what we must resolve.”

Ugandans have expressed widespread anger at the steep surge in prices of fuel, cooking oil, soap, wheat and other goods and government’s refusal to intervene to cushion consumers.

Besigye has been calling for tax cuts to offset inflation, but President Yoweri Museveni has rejected the idea, blaming high prices on the war in Ukraine and the COVID-19 pandemic.

Museveni, in power since 1986, is now Africa’s fourth longest ruling leader and the opposition and critics have accused him of rigging polls and using security forces to maintain his grip on power.

Besigye has run against Museveni four times in the past and lost although he rejected the results alleging fraud. He has been arrested dozens of times before.