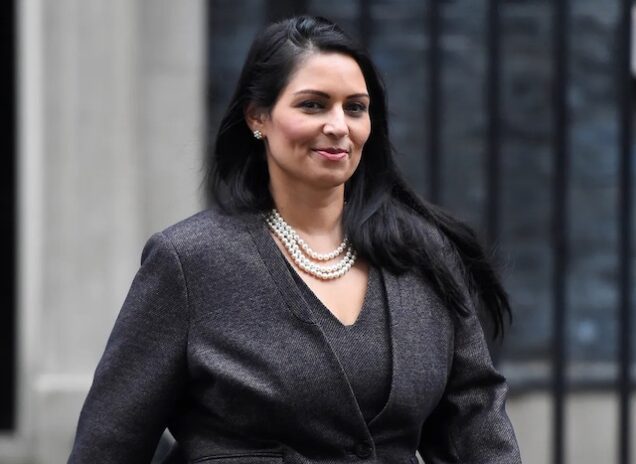 UK Home secretary Priti Patel said she has signed a major deal to speed up deportations of foreign criminals to Nigeria.

The Home Secretary’s agreement, according to Mail Online, will see offenders receive new travel documents within five working days. It came as 13 Nigerians were removed on a Home Office flight Thursday.

They included eight foreign criminals and five immigration offenders, such as those who had overstayed UK visas.

The flight faced legal challenges by Left-wing groups and protesters at Derwentside immigration centre in County Durham on Wednesday. It is understood a grandmother was among those pulled off the flight.

Campaigners claimed those due to be on board had claims against removal which included religious persecution, modern slavery, the right to family life, and persecution on the basis of sexual orientation.

One Nigerian asylum seeker due to be aboard the flight – who came to Britain in 2017 – claimed he faced prosecution in his home country for being gay.

Adeniyi Raji, 48, told the Guardian he was divorced by his wife after she caught him in bed with his lover, lost his job and had received death threats on social media.

In Nigeria, homosexual acts are punishable by up to 14 years’ imprisonment.

An immigration tribunal refused his asylum claim – but he has lodged an appeal, it was reported.

It is not known whether Mr Raji was aboard the flight.

Miss Patel said of the ‘memorandum of understanding’ (MoU) secured with Nigeria: ‘It is an important development that the UK and Nigeria have signed an agreement to co-operate on migration issues, to tackle illegal migration and the significant threat it poses to both nations.

‘The deal will mean that operational teams in both countries will share their expertise to take the fight to criminal people smugglers who are responsible for a wider range of criminality and put profit before people while undermining the security of our two countries.

‘This landmark agreement will increase the deportation of dangerous foreign criminals to make our streets and country safer.’

She was due to meet Nigeria’s High Commissioner to the UK, Sarafa Tunji Isola, Thursday to discuss ‘growing collaboration’, the Home Office spokesman said.

The Home Office has secured similar deals with other nations including Serbia, Albania and India.