Soyinka: My last moments with Femi, my late brother 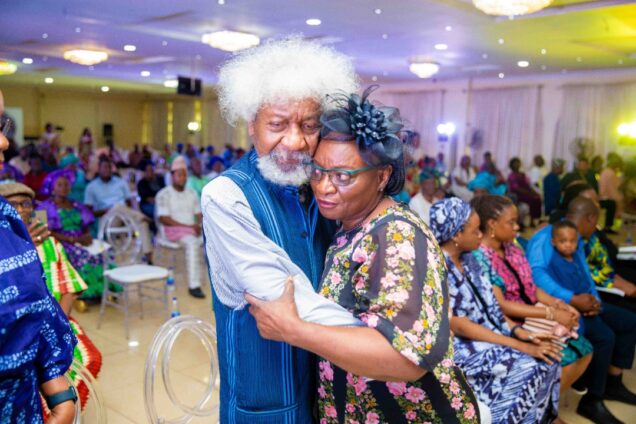 Nobel Laureate, Professor Wole Soyinka, has shared the last moments he had with his late younger brother, Femi Soyinka, renowned Professor of dermatology, venereology and clinical immunology, who died in the early hours of Tuesday 14 June 2022 at his home in Kukumada Village, Ibadan, Oyo State. He was 85 years old.

In very fine prose that betrayed his command of the English language, Soyinka described how his brother kept a tight hold on his hand, communing with silence, during those last emotion-laden moments 48 hours before his death as a show of love and recognition.

According to the highly respected man of letters, Femi gripped his hand twice, refusing to let go even when nature called. Soyinka made this revelation at the event tagged Evening of Tributes in Memory of Professor Femi Soyinka which was held on Thursday 29 June 2022 in Ibadan, Oyo State.

In the postscript of his tribute entitled The Secret Life of Baale Kukumada (as shared by his quite complicitous brother), Soyinka jokingly described Femi as an unrepentant bundle of mischief who remained one up to his last breath.

The tribute was read by the literary icon’s eldest son and former Commissioner of Health in Ogun State, Dr Olaokun Soyinka.

“I was with him barely forty-eight hours before his night of departure. I had been on the road for hours and, on arrival, should have gone to the toilet. However, that need was clean forgotten in my anxiety to see him, and I allowed his wife to lead me straight to his bedside.

“She pulled up a chair and I sat beside him, and took his hand. Femi returned the grip and we sat this for a while, communing in silence. Sometime later, Nature reminded me of a neglected duty. I tried to detach but he held on, quite gently, not letting go.

“So, I stayed put. Inevitably, Nature gave a more imperative nudge until finally, I was left with no choice. I gently detached his hand, went off, delivered and returned. Again I took his hand and again, he turned the grip. The pressure was, however, somewhat different in some indefinable way. It was still firm but gentle, so perhaps it was the pulse that had changed.

“Kofo had rejoined us. She sat next to his head and tried to coax him into acknowledging my presence in some more obvious way. It was not needed. I am convinced he knew me, had sensed who I was. That change in pulsation, I feel reassured, was his response, an inward, mischievous chuckle. And what that rapscallion was saying was: ‘Broda, I nearly made you pee in your pants,’” Soyinka narrated.

Soyinka left after spending a brief time there as he was ostensibly filled with the grief of losing a younger brother with whom he had been very close and shared many fond memories with. And indeed the bond between the two brothers was palpable during those last moments they shared.

Born in 1937, Femi, who shared a striking resemblance with the Nobel Laureate, was renowned for his contributions to the HIV/AIDS awareness campaign globally. Not only did he pioneer several types of research in the field of HIV/AIDS, but he also worked as a consultant to various international and local agencies including the World Health Organization, DFID, UNDP and Nigerian Federal Ministry of Health based on his extensive experience on the subject in various parts of the country.

Former Director to Dean of the Faculty of Health, Provost of the College of Health Sciences of Obafemi Awolowo University, Ile-Ife and President of the Society for Aids in Africa, Femi received a medical degree in Medicine and Surgery MBChB from the University of Heidelberg, 1964; and Doctor of Medicine (MD) degree from the same University in 1965. He specialised and practised as a Dermatologist, Venereologist and Allergologist at the University of Giessen, in 1969. In 1972, he obtained a Master of Public Health degree from Hadassah Medical School, (MPH) Israel.

He worked in the academic field for 30 years, holding various positions from Chief Medical Director to Dean of the Faculty of Health Sciences and the Provost of College of Health Sciences of Obafemi Awolowo University, Ile-Ife, Nigeria.

Femi was at the forefront of mitigating the impact of HIV/AIDS in Nigeria. By translating the outcomes of his research into clinical practice. He impacted significantly not only the lives of numerous individuals and families living with the disease but also the nation as a whole.

He initiated the Ambassador of Hope program in Nigeria, encouraging people living with HIV/AIDs (PLWHAs) to speak up, thereby bringing much-needed public awareness to the disease at a time when knowledge was low and stigma was high.

He also demonstrated technical knowledge and was involved with many other HIV/AIDs-related programs including HIV/AIDS prevention, care and support, prevention of mother-to-child transmission, ARV programs, voluntary counselling and testing (VCT) and home-based care for PLWHAs in Nigeria.

Subsequently, he contributed significantly to capacity building of indigenous organizations across the six geopolitical zones of Nigeria through his non-governmental organization – New Initiative for the Enhancement of Life and Health (NELAH) previously known as; Network on Ethics/Human Rights, Law, HIV/AIDS-Prevention, Support and Care (NELA). He was a past president of the Society for AIDS in Africa and he successfully coordinated the International Conference on AIDS and STIs In Africa (ICASA) in Abuja, Nigeria in the year 2005.