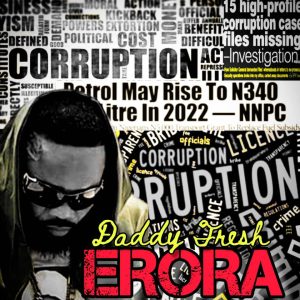 Daddy Fresh in an interview with the News Agency of Nigeria (NAN) on Saturday in Lagos, said there was a need to redefine humanity and integrity in the country.

He said: “Erora came about because of the happenings in our great Nigeria, a whole lot of things are going on from inflation, corruption, killings, kidnapping, banditry, high cost of living, schools on strike, and so on.

“A whole lot of children are on the street, because of the poor standard of living, and even the minimum wage is not even enough to do anything.

“The masses are the ones suffering. Look at the cost of fuel and gas today, everything is just skyrocketing by the day.

“When you listen to the news, most of the things you hear are always very heartbreaking.

“The governments are not putting much effort to curb this. So many youths today that is graduates have nothing tangible doing.

“You know what they say, that evil communication corrupts good manners. The good ones are getting worse because of the corrupt nature of the society.”

According to him, he decided to make a song so that the leaders will understand that the masses are suffering.

“I am just the voice to the suffering voiceless, we have to speak up. We need to make the right choice when the election comes,” he said.

Daddy Fresh said that the message in the song was to sensitize the people on happenings in the country and how it could be stabilized.

“This is terrible and not healthy for the country. We also have different crises going on, political, religious, and tribal crises, which will take us nowhere, how do we curb this?

“In some states in Nigeria, even during the day is a nightmare for them. They don’t sleep with their eyes closed. They are always afraid that something might happen.

“They should give listening hears to their people and do the needful so that we can have a better society.

“It is about time we wake up to reality and fix things up in our country,” he said.

He advised Nigerians to speak up for what they truly wanted as the 2023 general elections draw near.

“My message to the people towards the coming election is that they should understand that whatever they do today, determines how their future is going to be.

“We have to be very futuristic in the coming election so that things don’t get from bad to worse and we will have ourselves to blame.

“Check all the candidates, dig deep into their profile to check their competence and integrity,” he said.

The song, Erora, can be download on all online music platforms and also on ‘official daddy fresh’ on YouTube.