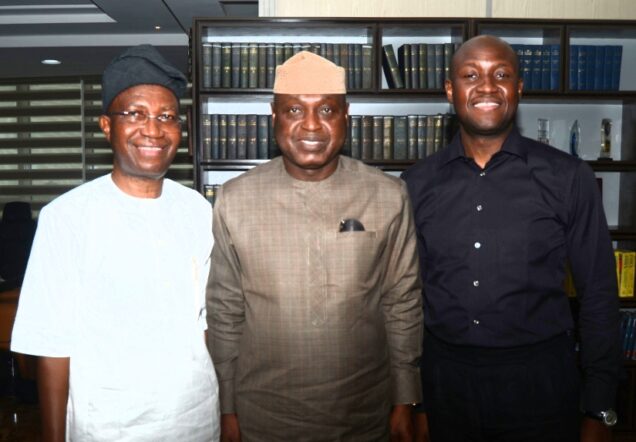 Oyebanji, who met the three legal titans  at their various offices, said the visit was in continuation of his earlier resolve to close ranks with passionate Ekiti leaders and carry them along as he pilots the affairs of the state.


“I started this consultation with my visit to the palace of Ewi of Ado Ekiti, after which I visited an elder statesman, Chief Deji Fasuan. I have also visited  former governors; Adeniyi Adebayo and Ayodele Fayose and had quality conversation with them. Today, I have chosen to visit three of the legal icons in Ekiti, who are making us proud. I must confess, each of them made my day through the quality advice they offered and their willingness to support Ekiti State anytime the need arises.

“This is necessary because development and good governance can only be enhanced when every stakeholder contributes to nation building,”

Speaking during the visit to his Ikoyi, Lagos office, Chief Wole Olanipekun said Oyebanji’s emergence as Governor-elect is not by accident, considering his (Oyebanji’s) involvement in the struggle that led to the creation of Ekiti State and his 11 year-experience in the government of the State.

“The Governor-elect is a brother in whom I’m well pleased. He is a rare gift to our dear state and I’m not surprised that God in his wisdom has thrown him up to become our governor. I first met him many years ago, when, at a very tender age, he joined the Ekiti leaders and traditional rulers who championed the struggle for the creation of conversations. I later met him when he was appointed into the office by the first executive governor of the State, Otunba Niyi Adebayo. It didn’t take me an hour after first conversation to know that he would go places.

” He’s intelligent, brilliant, humble and sincere to a fault. Besides, having served in various positions in Ekiti for 11 years, I don’t know any individual who can beat that record today and  possess those unique attributes I see in Abiodun. I’m happy for this visit and I have assured him of my support any day,”

Adesina, on his part, said  Oyebanji’s decision to consult Ekiti leaders at this preparatory level was the best decision anybody could take.

“The first advice I would have given our Governor-Elect is what he is already doing -consultation. He should make it a deliberate policy to bring Ekiti elites together and rub mind with them on what they could contribute. Gone are the days when government alone can bring about sustainable development. There are many Ekiti people out there who are not push over anywhere in the world and could contribute well to the growth of our state. Our incoming governor must involve them to contribute whatever they could contribute.


“The secret of it is that when idea comes from a particular set of people, they won’t allow it to die.  To engage our youths, I want to urge Mr. Oyebanji to invest more in technical colleges so that young men and women in Ekiti can acquire knowledge that can help them establish small scale businesses. This is necessary to re-orientate the Ekiti youths who have suddenly become the opposite of what we grew up to know,” Adesina said.

At the GRA, Ikeja, office of Mr. Femi Falana, the fiery Lawyer, warmly received Oyebanji and urged him to carve a special niche through effective and pragmatic governance that would bring about value restoration and economic  prosperity to Ekiti people.