Wike lands in Port Harcourt after vacation in Turkey (Photos) 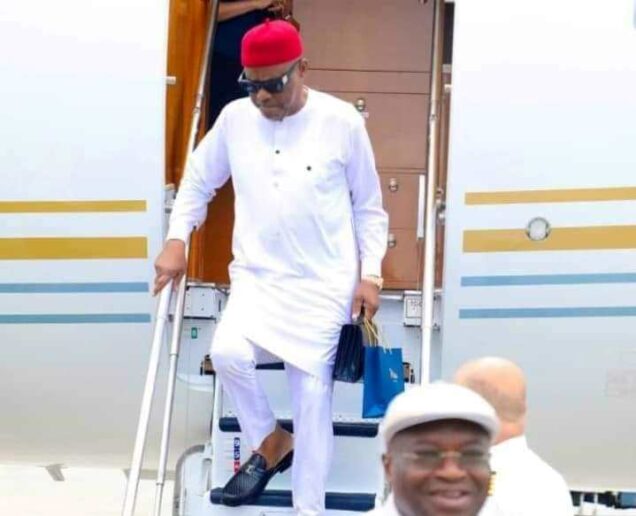 Rivers State Governor, Nyesom Wike has arrived from Turkey where he had gone for vacation after series of disappointment from his party, PDP.

The Rivers governor arrived Port Harcourt from Turkey on Saturday and had a warm reception.

Wike travelled to Turkey on vacation on Tuesday, June 28, 2022 when he released photos of himself and the Abia State Governor, Okezie Ikpeazu holidaying in that country.

Much has happened since Wike travelled to Turkey. His counter part in Oyo, Seyi Makinde visited him in Turkey.

While he was in Turkey, there was rumour that he flew to France where he met with the APC Presidential candidate, Asiwaju Bola Tinubu.

During his absence, the Benue State Governor, Samuel Ortom lashed out at the PDP for choosing Governor Ifeanyi Okowa of Delta State as Atiku’s running mate ahead of Wike.

A disappointed Ortom, when asked if he would support Atiku for the presidency said he was still praying to know if God wanted him to support him or not.

Former Ekiti State Governor, Ayodele Fayose also said the presidency must go to the south or nothing, meaning that he would not be supporting Atiku.