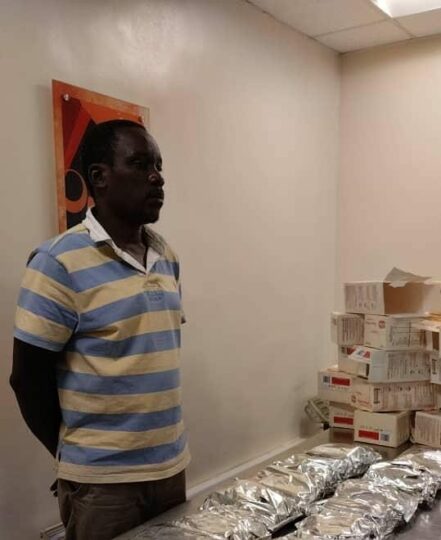 A suspected drug kingpin, Chike Okeke Eweni has been cracked by the National Drug Law Enforcement Agency, NDLEA, with large quantity of heroin with a street value of N4.5 billion.

A statement issued by NDLEA spokesman, Femi Babafemi on Sunday said the consignment, with a street value of over N4.5billion came from Johannesburg, South Africa on board South African Airways flight on Wednesday 29th June as part of a consolidated cargo that arrived the SAHCO import shed of the Lagos airport.

“After series of follow up operations that led to the arrest of two freight agents, the actual receiver of the drug consignment, Chike Okeke Eweni who distributes the substance for his South Africa based partner was arrested the following day, Thursday 30th June at a logistics warehouse in Ajao Estate, Ikeja.

Babafemi added that in Borno state, Usman Haruna, 27, was arrested at BCG checkpoint in Biu on Saturday 2nd July with 19.7kg cannabis.
Chairman/Chief Executive of the NDLEA, Brig. Gen. Mohamed Buba Marwa (Retd) has expressed satisfaction with the exemplary performance of the officers and men of the MMIA command in the past week while also commending those of Rivers, Kaduna and Borno for being vigilant.
He charged them and others across the country to remain steps ahead of the tricks by the desperate drug cartels.
Tags:   Chike Okeke Eweni   Ndlea