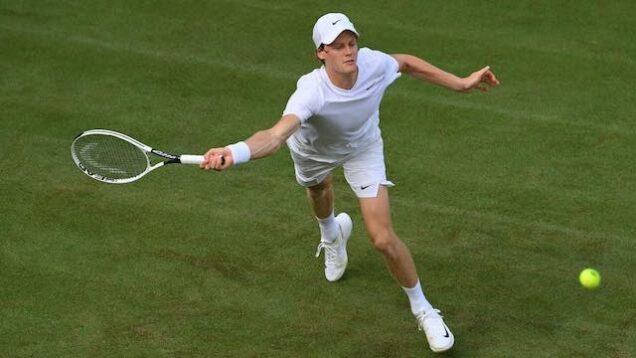 Italian Jannik Sinner enjoyed a night to remember on his Centre Court debut as he toppled fifth seed Carlos Alcaraz to reach the Wimbledon quarter-finals for the first time.

On a day when Wimbledon’s most famous stage celebrated its centenary, the two youngest players left in the men’s draw gave a glimpse of the future with some breathtaking shotmaking that earned them a standing ovation from 15,000 hollering fans.

However, during the first two sets there was little indication of the spellbinding drama that would end up unfolding on Centre Court.

The highly-rated Alcaraz, who has won a Tour-leading four titles this year, was sucked into a Sinner whirlwind as he lost seven games in a row from 1-1 in the first set.

The 19-year-old Spaniard recovered from that setback to deny Sinner two match points in the third-set tiebreak before three more went begging with Alcaraz serving at 5-2 down in the fourth.

But Sinner withstood the barrage of belting winners to finally book his place in the last eight at his sixth attempt when Alcaraz rolled a forehand into the net.

“Carlos is a very tough opponent and a very nice person so it’s always a huge pleasure to play him with such a great crowd and on a special day with 100 years of Centre Court – it’s just amazing,” said Sinner.

“It’s tough when you have match point and you still have to play – I tried my best, it’s part of the game, part of tennis.

“I’m very happy how I reacted in the beginning of the fourth because I was struggling but I’m very happy to be in the next round and hopefully I can play some good tennis there.”

In an earlier match, American Frances Tiafoe lost to Belgian David Goffin in a five-set thriller.

The win made Goffin match his 2019 quarter-final appearance at Wimbledon when he last played in the Grand Slam.

Now ranked 58th, Goffin will next meet local hope Cameron Norrie for a place in Friday’s semi-finals after holding his nerve to outlast Tiafoe 7-6(3) 5-7 5-7 6-4 7-5 in an absorbing contest on court one that lasted four hours 36 minutes.