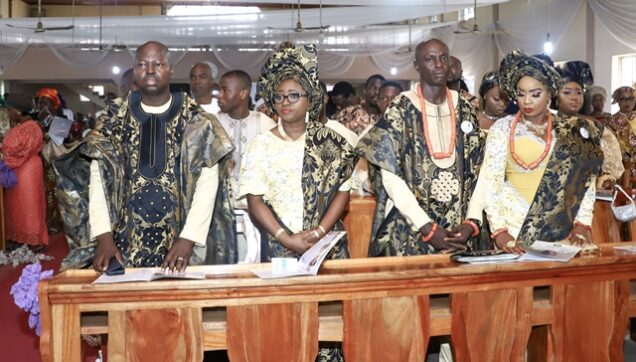 For two consecutive days, on Thursday June 30, 2022 and Friday, July 1, 2022, the ancient town of Ijebu Ode in Ijebu Ode Local Government Area, the second largest LGA in the state, was at its boisterous best, as the nonagenarian was laid to rest.

The event had in attendance the high and mighty in all the strata of the nation’s economy – banking sector, academia, administrative, political and business communities, including captains of industry, friends and associates of Mr. Adeyemi, who came in large numbers to celebrate with him and his family.

At the burial ceremony, many described Pa Odusanya, as a compassionate and an epitome of love and discipline while others noted that his humility and selfless service to God and humanity were second to none.

Baba Kekere was born on the 29th of November 1928, to the family of Pa Gabriel Odusanya Onamade Magbamade and Madam Aina Odusanya. He was the sixth child of his father who at the time, was the first Chief Baale of Erigo town in Ijebu Ode and was fondly called “Baba Baale”!

The late humanitarian started his education at the Epiphany Primary School, Erimiron via Ijebu Ode and completed the standard six education programme in 1948. Baba always had an affinity for the crafts and this in addition to the need for sustainable livelihood, facilitated his sojourn to Lagos after his primary school education to learn carpentry. In 1958, Baba married his heartthrob, Madam Cecilia Folake Odusanya and the union was blessed with five children, namely: Mrs. Olufunmilayo Odusanya (Late), Mr. Adekunle Babatunde Odusanya (a.k.a Kekere), Mr. Olufemi Odusanya, Mr. Adeyemi Oluwasesan Odusanya (Fiddo) and Mr. Abayomi Ayodele Odusanya (Anana).

In Lagos, Baba Kekere established a furniture factory at Abule-Nla, Apapa Road, Ebute Metta with a big show room at Herbert Macaulay. The craft of furniture/carpentry that he so much cherished took him to so many cities within and outside Lagos, delivering beautiful furniture arts in people’s homes.

Mr. Adeyemi, in his tribute, extolled the virtues of his late father who he described as his mentor and a selfless man.

“As his son, I feel sad, as a Christian, I feel glad for I know he is now resting in the bosom of our maker. As a man, I feel the void his absence creates in the life of my mother for they are inseparable!!

“I learned a lot from him. My father was high on values and always respected everyone both old and young. He knew the importance of valuing people. He was a compassionate man and taught me the age-old lessons around giving. He always believed that in giving selflessly, one receives benefits far superior than worldly riches. This by the way is how I know Baba is now in heaven.

“He was a man of humility. This was one of his noticeable virtues, perhaps, because of his humble beginnings or maybe it was innate and a God-given gift. Regardless, it is one I have grown to emulate and continue to enjoy its benefits in my personal and work life.

“There was a certain confidence in his stride or the way Baba coordinated himself that exuded very admirable confidence, one I have also sought to emulate over the years.

“Baba always said, ‘In time, all good things come to those that wait;’ of course this often was difficult to agree with in my youthful or younger days but as I mature more, I see the value in this outlook to life. Strive less and yield more to God’s guidance and control,” the banker with over two decades of experience in commercial banking, strategy, and operations concluded.