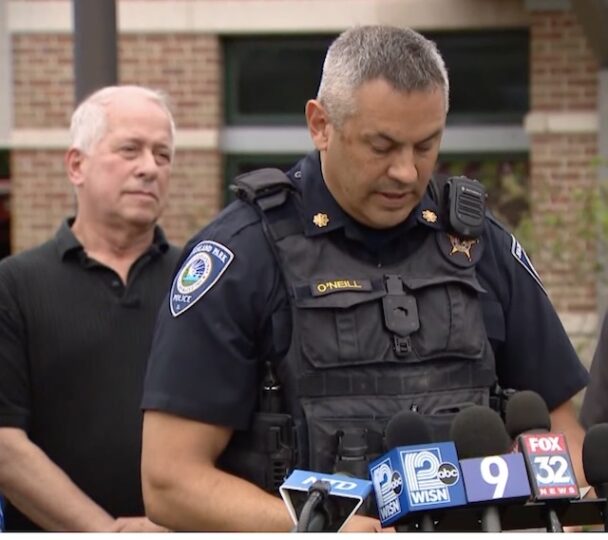 Illinois police are hunting for an “active shooter” who perched on a rooftop with a high-powered rifle and opened fire on a July 4 parade in Highland Park, killing at least six people and sending dozens more to the hospital.

“We are making significant progress,” Chris Covelli of the Lake County Sheriff’s office said of the investigation into the shooter.

The gunman was still at large more than five hours after the attack that turned a family-friendly celebration in a wealthy Chicago suburb into yet another terrifying bloodbath.

A shelter-in-place order for Highland Park was lifted for most of the community after several hours of what Covelli called a “very active apprehension effort.”

The suspect was described as a white male between the ages of 18 and 20, with longer black hair, a small build, and wearing a white or blue T-shirt. His rifle was recovered, but police said he should be considered armed and dangerous.

One witness, Shawn Cotreau, said he saw the shooter on the roof of a business along the parade route.

“I turned around and things were in flames, the tree was getting pelted with bullets and I could see the shooter,” Cotreau told CBS Chicago. “It took people 10 to 15 seconds to realize he was actually shooting.

“He was pointing [the gun] downward toward the center of the street,” he added. “I felt like the gunshots went on for minutes, it just didn’t stop.”

Local hospitals said they were treating two dozen patients, most of whom had suffered gunshots but some of whom were injured in the frantic attempt to flee the fusillade. Some were in critical condition, including at least one child.

The FBI has joined the investigation, and police were pleading with those who attended the parade to see if they had photos or video of the shooting area that could provide clues.

“We’re not going to leave any stones unturned,” Covelli said.