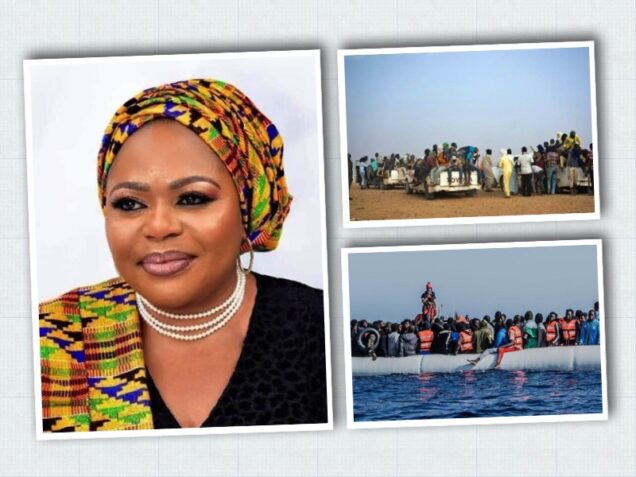 Mrs. Bamidele Ademola-Olateju, a commissioner in Ondo state has advised political leaders to work towards stopping young Nigerians from embarking on the perilous route of the Sahara Desert and the Mediterranean to Europe.

Bamidele who mans the Ministry of Regional Integration and Diaspora Relations, said good governance would dissuade young Nigerians from emigrating to Europe.

She expressed her concern in an article based on her interactions with migrants.

They told her that the migrant road network “ends at Agadez, Niger Republic; the rest is an ocean of endless dunes.”

The trip has become more perilous than before. A man whose brother-in-law travelled to Italy and was able to ferry six other siblings over said the migrants would find their way from Kano through Agadez in Niger Republic and the dunes of the Sahara, to Libya.

Along the route, they pray not to fall victim to bandits.

They spend about three months in the coastal areas, waiting for information about when vessels of the Red Cross and Red Crescent Movement would be patrolling the sea.

Once they have the information, they set sail on inflatable dinghies or big boats to make the over six-hour trip on the sea.

“Some of the boats with 200 passenger capacity would carry 500,” he explained.

If they were lucky, according to him, they would run into the Red Cross’ frigates which would carry them to their camps where they would be well taken care of.

“It is there that they are expected to prove why they should be given asylum in Europe,” he added.

Unfortunately, it is no longer a smooth matter. The recent killings of African migrants in Morocco, a case that attracted global condemnation, has put this in bold relief.

In November 2021, some Nigerians were among African and Asian migrants that died at the Libyan coastal city of Zawarain when they wanted to travel to Europe by boat via the Mediterranean sea.

“We are seeing the increases soar,” UNHCR’s Shabia Mantoo told a news briefing, describing it as “alarming.”

“We have been urging that there needs to be humanitarian and development action that needs to be strengthened to address these drivers that force people to move in the first place,” she added.

“This year’s figure is up from 1,544 recorded in 2020, with the report showing that for 2021, 1,924 people were reported dead or missing on the Central and Western Mediterranean routes, while another 1,153 perished on the North African maritime route to the Canary Islands.

“Most of the sea crossings took place in packed, unseaworthy, inflatable boats, many of which capsized or were deflated leading to the loss of life,” Mantoo said.

“Many boats drifted off course or otherwise went missing without a trace in these waters,” she added. The UNHCR report cautioned that land routes were also “highly dangerous”.

“Even greater numbers may have died on journeys through the Sahara Desert and remote border areas, in detention centres, or while in the captivity of smugglers or traffickers,” the UN said.

“UNHCR is appealing for support to help provide meaningful alternatives to these dangerous journeys and prevent people from becoming victims of traffickers,” Mantoo said.

For these reasons, Ademola-Olateju advised: “And to us in leadership, we must commit to working harder, to stop feeding our young men and women to the Sahara and the Mediterranean. We must think anew, plan anew and look for creative ways to solve our economic problems. We can’t continue to ignore this youth bulge and pretend we are okay. We are not okay!

“We must embrace selfless leadership, embrace new thinking that can create jobs and give opportunities and hope to young men and women in this land. May God help us think beyond ourselves and work for the present and the future.”

She warned those who are still nursing the ambition of venturing through the routes: “I will like to state it here unequivocally, it is a perilous journey for which many perish for a chance at freedom and dignity. We all know the harsh realities in Nigeria. We know economic opportunities and social mobility for young people have become a mirage.

“Personally, I know, understand, appreciate and share the feeling of not having a future to look up to. I get the despondency but please, if you get to read this, don’t journey through the desert. Don’t look to sail the Mediterranean in a rickety boat. Travelling through the Sahara desert as economic migrants is a perilous and unworthy risk.

“The Sahara is unforgiving. It has retained its state of nature, where might is king. The journey will drag you through several layers of hell with an AK-47 assault rifle constantly in your face.”