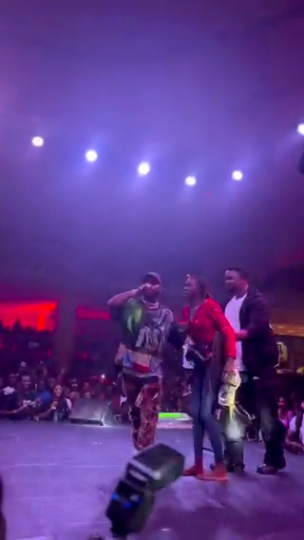 Superstar musician, David Adeleke, popularly known as Davido, has got Nigerians talking again as the singer showed love to a female fan at a Lagos event.

During his performance at the Infinix VIP event on Sunday night, the singer invited the ecstatic fan to the stage and gifted her his shoes.

Upon receiving the shoes, the fan went wild with excitement as she jumped around the stage, lay on the floor, and hugged the singer, who later ordered one of his aides to give her N2 million.

A video that captured the moment has gone viral on the Internet, causing many Nigerians to celebrate the singer for his philanthropic activities.

Following the viral video, Davido started to trend on Twitter as his fans sing his praises.

A fan, @kidapr_, tweeted, “My 001 gave this lady the best night of her life. That’s why we dey call a GOAT (Greatest of all times). He always turns up. It’s all love, Davido my GOAT today, tomorrow, and forever.”

Another fan, @basilsfavour said, “Davido can be paid 10 million for a show and he comes there and does 20 million giveaway. 001 for a reason.”

Hailing the singer as a true king, @Micheal04619370 wrote, “Now I know the meaning of Davido saying ‘OBO no go minus’. Even if he keeps giving, he will be having more not less. You are a true king. Even if you become a pastor at old age, you deserve it.”