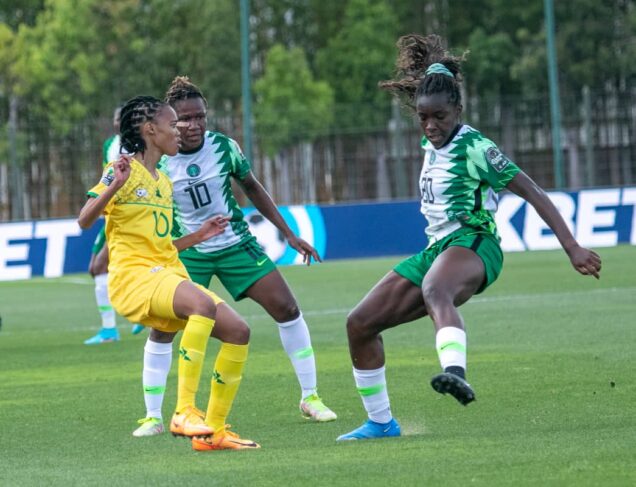 The Super Falcons of Nigeria have crashed to 1-2 defeat to the Bayana Bayana of South Africa at the ongoing Women African Cup of Nations (WAFCON) in Morocco.

The group C match was expected to be a cracker as the two teams represent powerhouse in women football in Africa.

The match was also expected to be grudge game after the Falcons crashed to South Africa 2-4 in 2021 in the final of the Aisha Buhari’s Cup in Nigeria.

The first half of the match played in Rabat, Morocco on Monday was goalless.

The South Africans took the lead on 60 minutes through Jermaine Seoposenwe.

On 65 minutes, Nigeria’s Rasheedat Ajibade came close to scoring but her effort was easily gathered by keeper Dlamini.

The Nigerian side pulled one back on two minutes of added time through Ajibade. She was assisted by Ebi Onome.