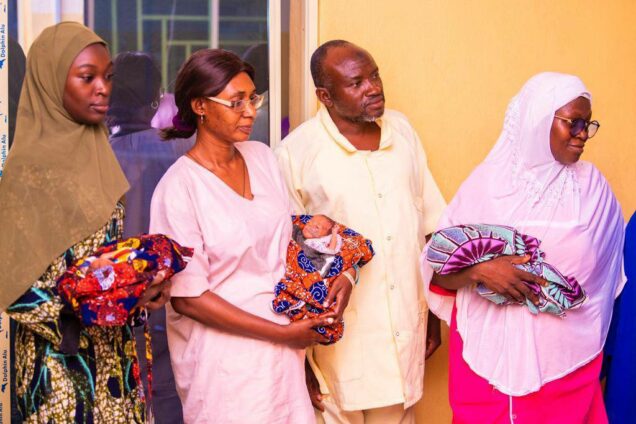 The quadruplets of Naja’atu Isiyaka during donation of food and baby care items to them by Hajiya Aisha Matawalle, wife of Zamfara governor

In a statement in Gusau, Press Secretary to the governor’s wife, Zainab Shua’ibu said the donation was made by the wife of Zamfara Commissioner for Special Duties, Fatima Abdul’aziz,on behalf of the First Lady.

The Press Secretary noted that the items were donated through the donor’s Anchor Initiative in supporting the less and vulnerable people groups.

“Presenting the items to the families at the Federal Medical Centre Gusau, Hajiya Aisha Matawalle expressed delight and rejoiced with the family for a successful delivery and prayed for the successful upbringing and survival of the children.

“Represented by the wife of Commissioner for Special Duties, Fatima Abdul’aziz, the governor’s wife said
the assistance was to reduce the burden of taking care of the children,” press secretary said.

In their separate remarks, parents of the quadruplets Alhaji isyaku Shinkafi and his wife Naja’atu Isiyaka, appreciated the donor for her kind gesture.

They prayed to almighty Allah for the success of Matawalle’s administration in the state and its commitment to helping the less privileged and vulnerable groups in the state. (NAN)