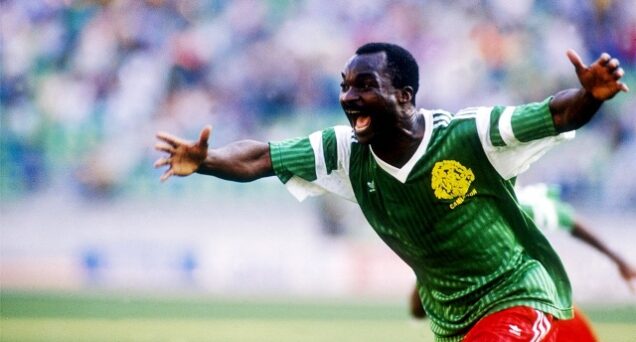 One of the most remarkable records in FIFA World Cup history belongs to an African football legend: Roger Milla of Cameroon, who holds the distinction of being the oldest goal scorer in the tournament’s history.

He initially set the mark at 38 years of age when he scored four goals for the Indomitable Lions in their remarkable run to the quarterfinals of the 1990 World Cup in Italy. But four years later, at USA 1994, Milla went even further.

When introduced as a substitute in Cameroon’s final Group B match against Russia in Stanford, he became the oldest player ever to take part in a World Cup match (a record that has since been beaten, first by Colombia’s Faryd Mondragon at Brazil 2014 and then by Egypt’s Essam El Hadary at Russia 2018).

He also struck home a goal in the opening minute of the second half, therefore becoming the oldest goal scorer ever at a World Cup. His record (42 years 39 days) stands to this day and could well remain in place forever, given that football has become a more and more athletically-demanding sport, therefore reducing the space for older players to thrive at the highest level.

“I’m still very proud of [the record] today,” Milla told FIFA. “To my mind, that goal and that record showed the people who doubted me that I still had it in me, despite my age. Physically, I wasn’t 100 per cent, but I still had my technique. It’s a lovely record.”

As to whether his record will ever be eclipsed, Milla has his doubts: “Nothing’s impossible but it’ll be very difficult to beat. Football’s a very different sport today and it’s really hard to see anyone other than a keeper getting capped at the age of 42. And, as we all know, keepers don’t score very often. I think my record has got a few good years left in it yet.”

Milla is also hopeful that African football will break the glass ceiling of a quarterfinal showing at the World Cup – something his Cameroon team achieved as a first in 1990, and since equalled by Senegal in 2002 and Ghana in 2010.

“Senegal and Ghana showed that it was possible. We’re still some way behind European football so it’s going to be difficult to get there, but I’m still optimistic,” said the football legend.

“I get the feeling that the current generation of players sometimes lack confidence and determination, like us at the time. We have to believe in ourselves if we want to put in those kinds of performances at every World Cup.”

As we count down to the most watched football competition in the world, DStv and GOtv customers can look forward to viewing the tournament set to run from 21 November to 18 December on SuperSport.