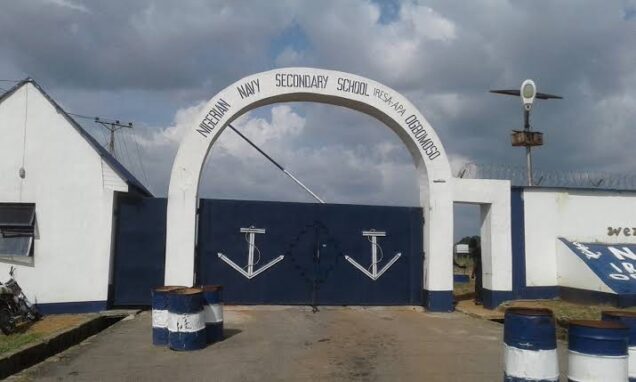 Three Junior Secondary School (JSS) students of the Nigerian Navy Secondary School (NNSS), Ogbomoso, have been expelled by the school for scaling the ceiling to steal provisions and examination  question papers.

According to information from the school Commandant’s office, the three students (name withheld) carried out the devilish act on Saturday, June 14, 2022.

The school said it was observed with dismay that the House Master’s cabin inside the students hostel was burgled and a large quantity of provisions stolen on Saturday 14 June 2022.

It said similarly, question papers for the just concluded 3rd term examination were burgled in the exams and records office by miscreants who accessed the office through the toilet ceiling of the adjoining classroom.

The school explained that an investigation was launched by the school authority to ascertain the perpetrators of this heinous crime.

The authorities said findings from the investigation revealed that three students, two from JSS 2 and one from JSS 1 conspired to burgle and steal provisions from their house masters cabin by (1730) 5:30 PM, when other students had gone to dinning to take their evening meal.

The school also said it was discovered that the same students illegally accessed the Exams and Records office through the ceiling by 0600 (6am) in search of the ongoing exams questions .

“The stolen provisions and yet to be written exam questions paper were also recovered from the students,” it said.

Additionally, the NNSS disclosed that another SS1 student (name withheld) was also caught on Monday 27 June, 2022 while trying to access the Chemistry Laboratory through the window, with the intent to steal at about 19:17 (7pm) in the night.

”In summary, the School’s Discplinary Committee deliberated on the issue on Tuesday 28 June 2022, and sanctioned the offenders accordingly,” it added.