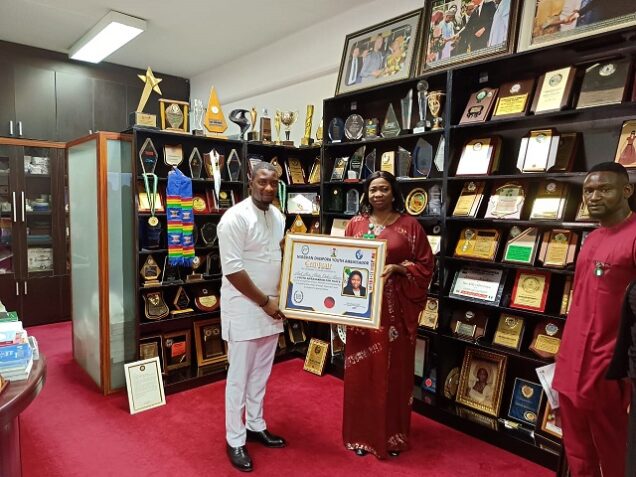 Members of Nigerian Diaspora Youth Ambassador led by President of the Association, Mr David Alozie and other members during to Abike Dabiri-Erewa Chairman/CEO, Nigerians in Diaspora Commission in Abuja on Tuesday.

Nigerian students in Northern Cyprus are suffering from intense depression as a result of the inhuman treatment meted to them by the country’s authorities, a group has alleged.

The group, Nigerian Diaspora Youth Ambassador, said this during by President of the Association, Mr David Alozie and other members to Abike Dabiri-Erewa Chairman/CEO, Nigerians in Diaspora Commission in Abuja on Tuesday.

While appealing for quick intervention on the plight of Nigerian students in Northern Cyprus, the group noted that the depression has given rise to the high rate of suicide amongst them.

Alozie, who spoke on behalf of the group noted that Nigerian students are being racially profiled and deported on arrival at the airport for establishing contact with any individual in Southern Cyprus.

He added that Nigerian students are forced to pay for tuition in Pounds whereas other foreign students pay in Turkish Lira (TL).

Alozie and his team expressed willingness to collaborate with the Nigerians in Diaspora Commission and other relevant agencies to create more awareness on challenges Nigerian youths are facing in Northern Cyprus.

In his words “Turkish Republic of Northern Cyprus is not the best place to study, as majority of the institutions there are not recognized by the European Union (EU) or any country in the world”.

In her response, Dabiri-Erewa advised that Northern Cyprus is becoming a dangerous transit route for migrants, stressing that the country is not recognized by any country in the world except Turkey.

She therefore stressed the need for further awareness to sensitize Nigerian youths who are living their country with the hope of better education.

Dabiri-Erewa gave assurance that Nidcom will continue to work with relevant agencies like the International Organization for Migration (IOM), Nigeria Immigration Service (NIS) and the Parent Ministry of Foreign Affairs on the nagging issue of northern Cyprus.

It should be noted that Northern Cyprus is recognized only by Republic of Turkey.

Nigeria and other countries do not have an Embassy there, making it difficult to take up the case with the United Nations or European Union.