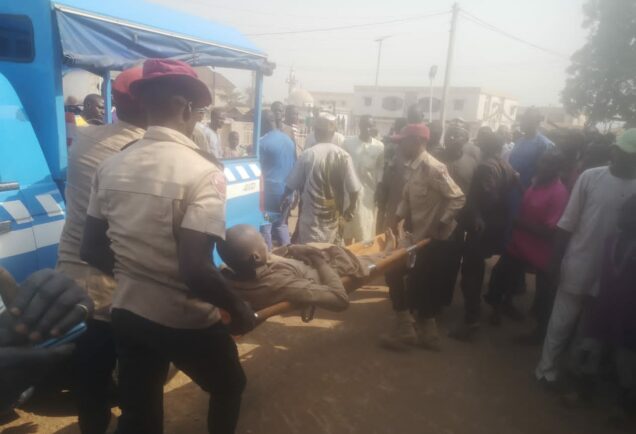 File Photo: The injured victim of an accident being rescued by FRSC officials

Nine persons have been confirmed dead and 12 others injured in an accident involving four vehicles on the Kaduna-Zaria highway on Thursday.

The FRSC Kaduna State Sector Commander, Hafiz Mohammed, said the accident occurred at about 5 a.m. on the Rigachikun bridge, close to the National Open University.

“Two DAF trailers, a Toyota bus and a Toyota Camry were involved in the accident which is as a result of speeding, wrongful overtaking and loss of control.

“The injuries they sustained included fracture, bruises and head injuries,” he said.

The sector commander said that the injured victims and corpses were taken to the St. Gerard Hospital and Barau Dikko Teaching Hospital in Kaduna.

Mohammed advised motorists to always abide by safety rules to save lives and property.