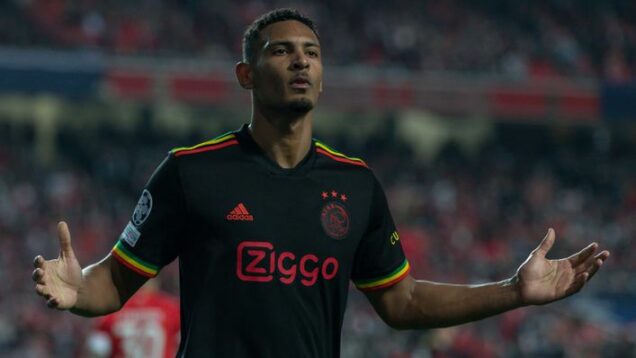 Borussia Dortmund have completed the signing of striker Sebastien Haller from Ajax on a four-year deal for an initial £26.5million.

The Ivory Coast international, 28, netted 47 goals in 65 games for the Dutch giants having moved to the Netherlands from West Ham in January 2021.

Despite a disappointing Premier League spell, in which he netted only 10 times in 48 appearances in the English top-flight, the centre-forward flourished with the Amsterdam club.

Haller netted 33 goals in 77 games for Eintracht Frankfurt between 2017 and 2019 and is relishing the chance to play in front of Dortmund’s famous fans.

He said: “The stadium is great, but the greatest stadium is nothing without its fans.

“As part of the BVB family, I can’t wait to feel the support of more than 80,000 spectators in the future.

“We’ll hopefully achieve great things together in the next few years and be able to celebrate together too.”

The 28-year-old was the Eredivisie’s top scorer last term, notching 21 strikes, in addition to a stunning Champions League campaign that saw the Paris native hit 11 goals in only seven starts.

Haller will wear the No9 shirt for BVB and sporting director Sebastian Kehl was thrilled to get their man after losing Erling Haaland to Manchester City earlier this summer.

He added: “We’re very pleased to have been able to sign Sebastien Haller — a seasoned center-forward who has recently caused a sensation in the Champions League, but who also knows the Bundesliga in particular and has already demonstrated his class and high-quality finishing there.

“The overall package is very promising. Sebastien possesses a strong physical presence and he is physically very resilient.

“With his experience, he can also offer support and stability to our young attacking players.

“During the talks with us, he made it clear that he has big ambitions with BVB.”