Nigerians mock Adeleke for being absent at Osun governorship debate 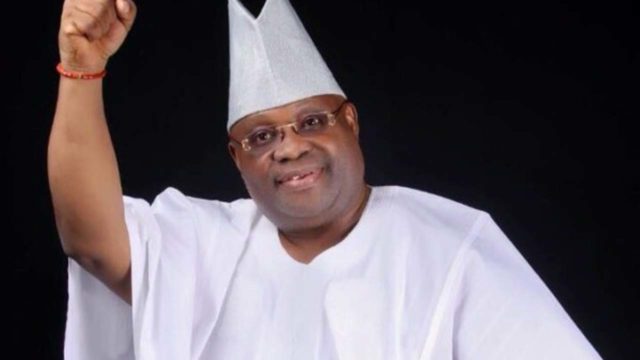 The Peoples Democratic Party (PDP) governorship candidate in Osun, Ademola Adeleke was conspicuously missing on Wednesday in a governorship debate on Arise TV.

Those who attended the debate are: Governor Adegboyega Oyetola of All Progressives Congress, Lasun Yusuf of Labour Party, Goke Omigbodun of Social Democratic Party and Akin Ogunbiyi of the Accord Party.

Adeleke did not give any reason for not attending the governorship debate meant to grill them on their vision for Osun State.

Nigerians have reacted to the PDP’s governorship candidate’s absence at the debate, saying it was very unpleasant.

Diddyderek tweeted: “If you want Adeleke to show up, just organize a dancing competition I promise you he won’t miss it for the world who debate help na by force to share ideas.”

According to SMD, “Truth be told Adeleke is not ready for the Job, he is just an over hyped aspirants who just want to be in power and enjoy the state wealth.”

Oluwatimilehin Kolade tweeted: “Since Adeleke is not comfortable with a debate where ideas will be postulated for the development of Osun state, maybe media houses should organize dancing competition to make the governorship race in Osun more inclusive.”

As for Okpolokpo Paul, “Adeleke being absent from the debate is a red flag that shouldn’t be ignored.”

Chigozirim Aliyu Emeakayi added: “Adeleke was absent during the Osun State Gubernatorial debate today, because DJ was not invited to the debate.”

Dreaded Okiki said “If Adeleke thinks because he knows how to wiggle and whine waist and has a cuz that’s famous,he will get him to be the Governor, he better think again. He wants to turn Osogbo to London and he starts by making himself absent from a debate, lmaoo.”

Kenny Fabulous tweeted: “The PDP candidate, Ademola Adeleke didn’t show up for the debate, when it’s not dancing competition. Lol”

Nduka stated: “Adeleke didn’t show for the debate despite the governor being there? PDP is truly the worst opposition party in history. They don’t deserve anything.”