Six deadly robbers smashed, one killed in gun-battle with police in Lagos 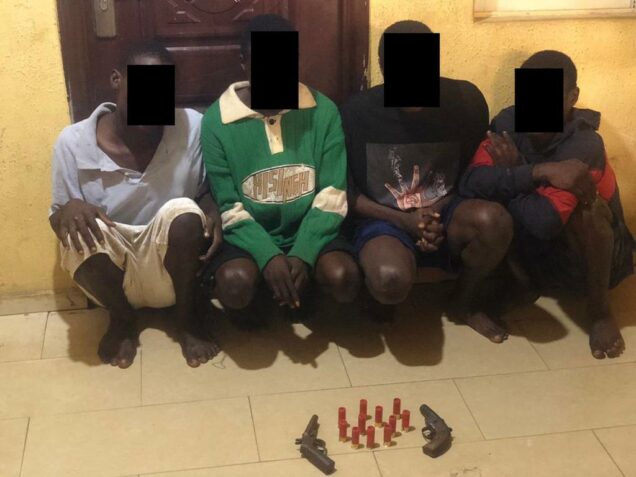 Four of the suspected robbers

Operatives of the Lagos State Police Command have arrested six notorious robbers suspected to be behind the May 11, 2022 robbery attack on Mambillah Hotel, Owutu, Ikorodu.

One of the robbers was killed during a gun-battle with the police in Lagos.

A statement issued by the command’s spokesman, Benjamin Hundeyin on Thursday said the arrest of the suspects follows painstaking, diligent and discreet investigation ordered and closely monitored by the Lagos State Commissioner of Police, CP Abiodun Alabi.

Hundeyin said the suspects were traced to their hideout at Oju-irin Abattoir, Lagos State where they were eventually arrested.

“The seventh suspect, Taye was neutralized during a gun duel with police officers. Items recovered from the suspects are two locally made pistols with 11 live cartridges,” he said.

Armed gang had invaded Mambillah Hotel, robbing guests of their valuables and shot dead the hotel security guard in their bid to escape after the Police arrived the scene.

“The earlier arrested supervisor and other staff of the hotel have since been released after further investigations cleared them of any culpability.

“Suspects are to be arraigned in court as the investigation is currently being wound up,” Hundeyin said.