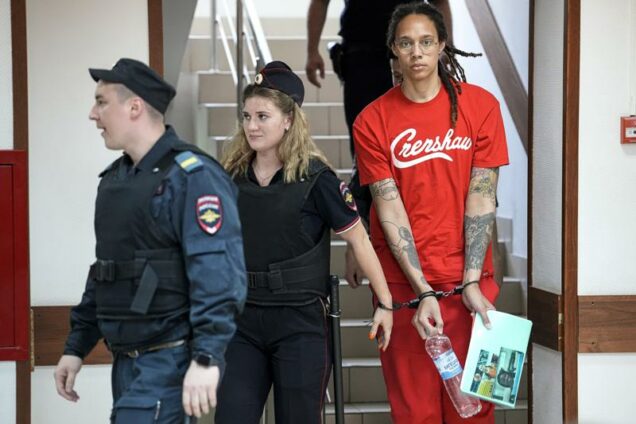 Detained American basketball star Brittney Griner on Thursday pleaded guilty to drug possession and smuggling during her trial in Moscow but said she had no intention of committing a crime.

Russian news agencies quoted Griner as saying through an interpreter at the court hearing that she had acted unintentionally because she was packing in haste.

Griner was detained in February at Moscow’s Sheremetyevo Airport after vape canisters with cannabis oil allegedly were found in her luggage.

She faces up to 10 years in prison if convicted of large-scale transportation of drugs.

The trial of the Phoenix Mercury star and two-time Olympic gold medalist began last week amid a growing chorus of calls for Washington to do more to secure her freedom nearly five months after her arrest.

Before Thursday’s hearing, Russian police escorted Griner, handcuffed and clad in a bright red T-shirt and sports trousers, into the courtroom past a crowd of journalists.

The athlete was detained in February at Moscow’s Sheremetyevo Airport after vape canisters with cannabis oil allegedly were found in her luggage.

The trial of the Phoenix Mercury star and two-time Olympic gold medalist was adjourned after its start last week because two scheduled witnesses did not appear.

Such delays are routine in Russian courts and her detention has been authorized through Dec. 20, suggesting the proceedings could last months.

Although Griner’s supporters initially kept a low profile, calls for the United States to take action spiked after the trial’s first day.

The Rev. Al Sharpton, one of America’s most prominent Black activists, this week called for President Joe Biden to arrange a prayer meeting with Griner.

“Four months is too long for this to have gone on, and I hope the President acts on her pleas to come home,” Al Sharpton said.