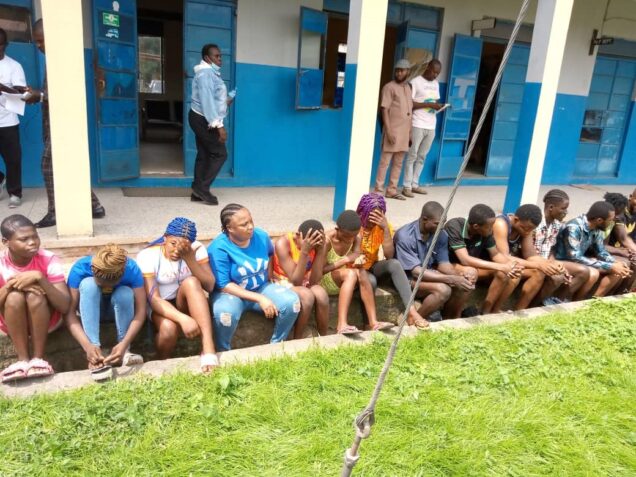 Alleged cultists paraded by the police in Edo

Thirty suspects, including seven females, were on Thursday paraded by the Edo state police command, over alleged involvement in the recent cult-related clashes that claimed several in Benin metropolis.

It was gathered the suspects were arrested on July 6 during police raid on criminals hideouts at Siloko, Ogbiyokho and Lawani and New Benin axis .

The command’s spokesman, SP Chidi Nwabuzor, who paraded the suspects, said they were arrested following the recent cult related clashes in the state.

He added that as part of the ongoing clap down on criminals in the state, the command’s anti-cultism unit raided criminal hide outs and black spots, .

“During the raid, 30 suspects comprising 23 males and seven females were arrested. The suspects confessed to being members of various cult groups in the state,” he said.

According to the command’s image maker, the suspects are made up of members of Eiye, Aiye, Bucaneer, Vikings and Maphite confraternities.

In an interview with journalists, the suspects however denied being members of any cult group, saying they only got to know why they were arrested during their parade at the command’s headquarters.

One of the suspects, 40-year-old Rose Okafor, said she was arrested while selling drinks at Parliament Hotel on the Lawani street area of Benin.

The mother of three said she was out to look for her daily bread when she was arrested by the police.

She said: “I was arrested by the police at about 9pm. They arrested five of us at the same place and they didn’t tell us why we were arrested. We are only hearing it now that we are cultists. I am not a cults.”