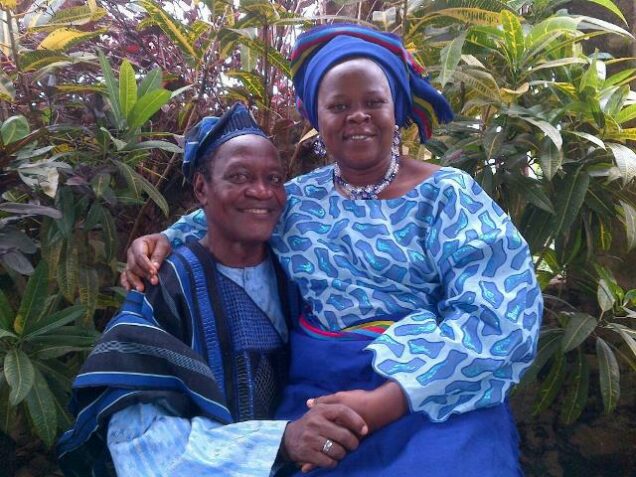 Mrs Toyin Solanke, wife of legendary musician, folklorist, singer, actor, dancer, composer and master storyteller has described her husband who turned 80 on 4 July as a hardworking artiste who doesn’t joke with his work.

Toyin, who has been married to her husband for 39 years and whom the consummate artiste fondly calls Toy or Fine Girl, made this disclosure on Friday 8 September 2022 at Freedom Park, Lagos while addressing students at Living Icon: Live drawing, one of the week-long events organised to celebrate Solanke at 80.  The event was directed by distinguished Nigerian painter, Olu Ajayi.

Toyin also gave reasons why her husband keeps late hours, stressing his tenacity of purpose. “Jimi Solanke would not have worked  and be doing any other thing or stay away from his work until when he finishes it. He stays awake all the time. Mostly at midnight you will see him working. And then whenever he is tired, you will be the one to be begging him to go back to sleep. He will not live his work to go and sleep , but until when nature totally catches up with him. So it is very important that you take your work seriously, ” she maintained.

The graduate of dramatic arts from the Obafemi Awolowo University Ile- Ife, however disclosed that the force that propels her husband’s legendary work with children as a storyteller, motivator snd nurturer is his undying love for them.

“And one other thing I would like to tell you about him Is that whenever he sees children he shows so much love for them. He doesn’t joke with children. He loves children. There is something that he normally does in those days we were living in the village. (Because I would call that part of town a village)

“When he sees women hawking around, with babies tied on their back, or them pulling children, he calls them, empty their baskets, what ever they are selling. He will tell them to put everything down. ‘I am buying everything,’ he would say. So whenever you ask him why  is he doing that? What do we need this for? He might buy everything that we don’t even need. He would say he is doing that so that the woman that is hawking can keep the baby in the house, away from the sun.

“He was just doing this. Because that woman would get back home, carry another one and still go back to the streets and hawk. But that shows the love he has for children. So he is somebody that wants success for children.

“Even when my children were babies growing up, he wanted to hire a private teacher for them in the house so that they can be away from any harm outside the house. But I always tell him that is not possible. They have to mix with children and grow with then and learn. So that is just to tell you  how much he loves children,” Toyin averred.