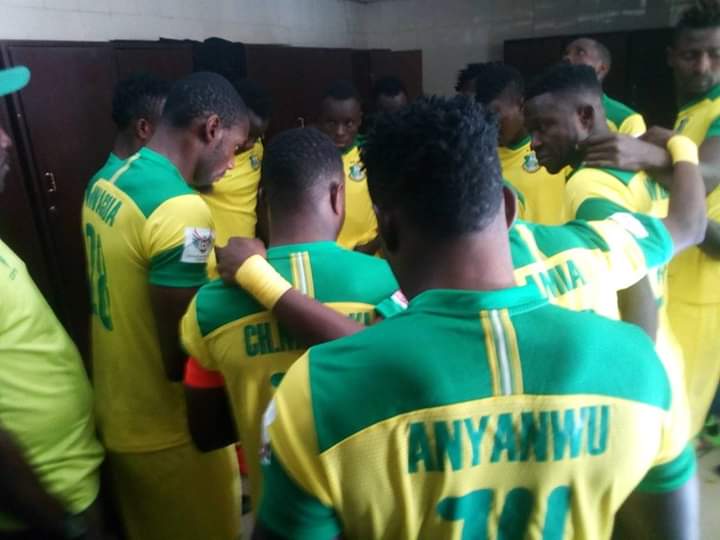 The League Management Committee (LMC) said it has deducted three points from Kano Pillars and suspended some match officials for one year from all football-related activities.

This it said was following the improper conduct of the club as well as the match officials in a Match Day 31 fixture involving hosts Kano Pillars FC and Dakkada Int’l FC.

A statement by Ademola Olajire, Director of Communications at the Nigeria Football Federation (NFF) quoted the NFF Disciplinary Committee as saying that the acts perpetrated by the officials were capable of bringing the game to disrepute.

A former chairman of Kano Pillars FC, Suraj Yahaya, had assaulted Assistant Referee 1, Daramola Olalekan, during the course of the match.

This was after match officials awarded a goal scored by Dakkada Int’l FC in the final minute of play to level scores at 1-1 in the rescheduled NPFL match at the Sani Abacha stadium.

Immediately after the goal was scored via Edidiong Ezekiel’s diving header from a free-kick, Yahaya reportedly ran towards the Assistant Referee and punched him in the face.

The action by Yahaya further instigated violent disruptions from Pillars club officials and some fans who illegally gained entrance into the stadium for the game.

In the face of growing tension and threats, the assistant referee, who had earlier confirmed the goal, made a U-turn after over 23 minutes of impasse.

The LMC official at the venue wasn’t spared with his iPad broken as well as a camera, Sony HD Full HD 1920×1080, belonging to Dakkada Int’l FC.

NAN also reports that this was not the first time Kano Pillars was involved in such cases of violence and hooliganism as it had been a reoccurring phenomenon by the club.

The NFF Disciplinary Committee after its findings said it found Kano Pillars guilty of failing to control its officials and ensure proper conduct during the match.

The LMC in its summary jurisdiction of April 17, in a matchday 23 fixture between Kano Pillars FC and Katsina United FC, had imposed a sanction of forfeiture of three points accruing to the club in the event of any similar breach.

In this case, there was a loss of property or valuables which they failed to implement.

LMC also noted that the match official, in spite of the purported threat had no justification to have retracted or withdrawn his decision after recognizing the goal scored by Dakkada Int’l FC as legitimate.

“That Kano Pillars FC failed to control its officials and ensure proper conduct during the match which resulted in the assault of a match official.

“That the former chairman of Kano Pillars FC, Suraj Yahaya, assaulted Assistant Referee 1, Daramola Olalekan, during the course of the match.

“That the assault of an Assistant Referee 1 (Daramola Olalekan) by the former Chairman of Kano Pillars FC (Suraj Yahaya) is an act capable of bringing the game to disrepute.

“That the conduct of the Match Commissioner, Central Referee and the Assistant Referee 1 regarding the scoreline and the circumstances surrounding the report of the match under review left much to be desired.”

The LMC ruled that Assistant Referee 1 despite the purported threat had no justification to retract or withdraw his decision after recognizing the goal scored by Dakkada Int’l FC in the 92nd minute of play as a legitimate goal.

“The Central Referee has no justification to disallow the goal scored by Dakkada Int’l FC in the 92nd minute after adjudging it as a legitimate goal.

“The inability of the Central Referee to maintain his decision on the outcome of the match, wherein he wrote two conflicting reports, has brought the game of football into disrepute,” it said.

It said in view of the findings, the NFF Disciplinary Committee, therefore, decided as follows:

“That the Match Officials, particularly the Match Commissioner, Centre Referee and the Assistant Referee 1 are hereby suspended for one year from all football-related activities with immediate effect.

“The Match Commissioners and Referee Appointment Committees are by this decision put on notice.

“That despite the unfortunate circumstances surrounding the goal scored by Dakkada Int’l FC at the 92nd minute the committee lacks the power to reinstate or award a goal.

It said It hereby activates the three (3) points suspended sentence contained in the summary jurisdiction of the LMC between Kano Pillars FC and Katsina United FC in matchday 23 fixtures dated April 17.

“Particularly paragraph 5(k) to wit: “In the event of any further similar breach of the League Rules, Kano Pillars FC shall forfeit three (3) points from the points accruing to the club in addition to any other sanctions that may be deemed appropriate”.

“That the above decisions are without prejudice to the right of appeal,” it said.