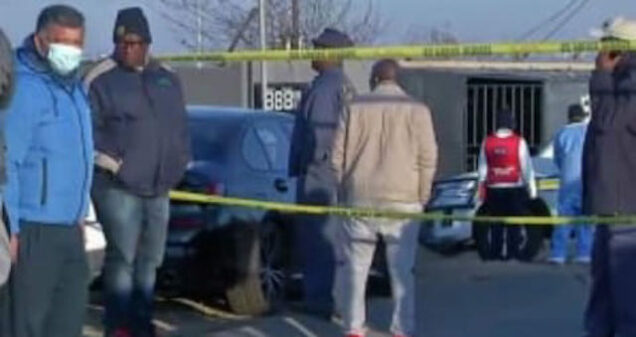 Gunmen opened fire on people sitting in a tavern in South Africa’s biggest township of Soweto in the early hours of Sunday, killing 14 and wounding another nine, police said.

Police said in a statement that shortly after midnight at Nomzamo Park tavern.

“A group of men armed with rifles and 9mm pistols entered the tavern and started shooting randomly at the patrons who were sitting inside, ” police said.

Police said a hunt was on to find the perpetrators.

“What I can say is the assailants came into the tavern they found those people, they were enjoying themselves unprovoked and they start shooting off them using the rifles…and thus far the investigation is still continuing,” said provincial Police Commissioner, Elias Mawela.

“12 people died on the scene and another one died on arrival at Chris Hani Baragwanath hospital and the 14th one also died after admission,” said Mawela, adding that the victims were between the ages of 19 and 35.

Mawela added that the motive for the shooting is unknown at this stage and no arrests have been made.

The police have pleaded with anyone who may have information about the shooting incident to contact their nearest police.

Four people have also been killed and another eight are in critical condition in another tavern shooting, in Pietermaritzburg, KwaZulu-Natal.

Police spokesperson Lieutenant Colonel Nqobile Gwala told News24 that the four were killed around 20:30 on Saturday at a tavern in Sweet Waters.

Both incidents come after the Enyobeni Tavern tragedy, a shebeen in East London, Eastern Cape, where 21 people died on 26 June.