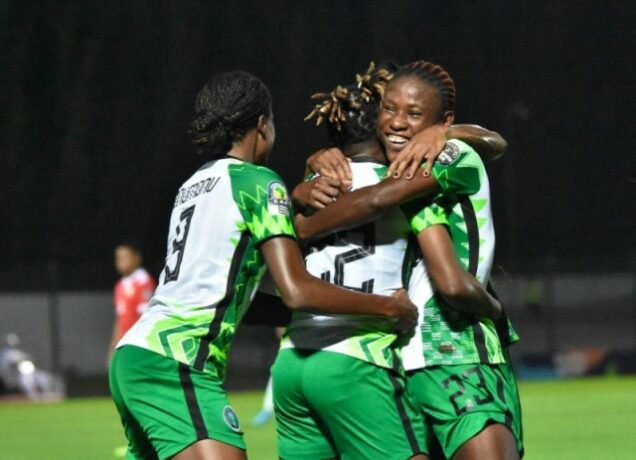 Super Falcons players celebrate one of their goals

The Super Falcons of Nigeria on Sunday demolished Burundi 4-0 in their last group game to reach WAFCON’s quarter-finals.

The Burundians were no match for the Nigerian side that dominated the game from beginning till the end.

Rasheedat Ajibade calmly converted a penalty on 25 minutes after she was brought down to give the Falcons the lead.

Peace Efih made it 2-0 for the Nigerian side on 28 minutes, while Uchenna Kanu made it three from close range a minute later.

On 37th minute, Ifeoma Onumonu came close to scoring but her soft strike was easily gathered by Burundi’s keeper.

Kanu struck the fourth goal a minute later but the referee ruled it out for offside.

But she was unstoppable on 46th minute to make it 4-0 for Nigeria and a brace for herself.

The Super Falcons will now play Cameroon in the quarter final of the tournament later in the week.