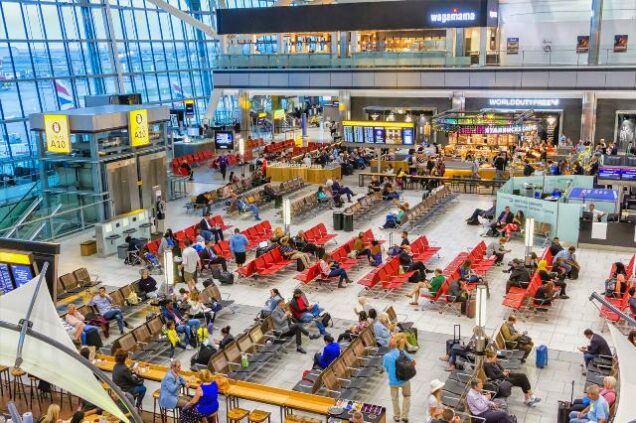 In Britain, Heathrow Airport ordered the cancellation of dozens of flights at short notice on Monday, affecting around 10,000 passengers.

Sixty-one flights were axed as the west London airport did not believe it could have handled the expected number of passengers.

Airlines have been asked not to rebook affected travellers on to alternative flights departing on Monday.

Baggage system failures at Terminal 3 over the weekend resulted in hundreds of bags not being put on to flights.

“We apologise for the impact to travel plans and we are working closely with airlines to get affected passengers rebooked on to other flights.

“While Heathrow is ramping up resource and will have as many security officers this summer as we had pre-pandemic, airspace constraints across Europe and a lack of airline ground-handling staff can pose a risk to the smooth running of operations.

“As a result, we will take action where needed to ensure passengers receive the service level they deserve.”

Affected passengers are not entitled to compensation from airlines as the reason for the cancellation is classified as being outside of their control.

According to dpa, the measure caused Virgin Atlantic to cancel two arrivals and one departure on Monday.

A spokeswoman for the airline said: “Following significant security delays and baggage system failures this weekend, under its conditions of use, Heathrow Airport has introduced last-minute flight capacity restrictions to all airlines in Terminals 3 on Monday July 11, limiting the number of flights that can operate.

“Unfortunately, Heathrow’s mandated capacity reduction means that we have had to cancel three Virgin Atlantic flights due to operate.

“Our teams are working hard to ensure customers can complete their journey as quickly as possible, with the option to rebook on a later date or request a refund.”

The cancellations are on top of previous schedule reductions already implemented by airlines.

Earlier on Monday, Heathrow warned it will ask carriers to cut more flights if it does not believe their actions will sufficiently reduce disruption.

The punctuality of arriving flights is “very low” and there have been “periods in recent weeks where service levels have not been acceptable,” the airport admitted.

Problems include “long queue times, delays for passengers with reduced mobility (and) bags not travelling with passengers or arriving late,” according to Heathrow.

Chief executive John Holland-Kaye said: “We have already seen times recently when demand exceeds the capacity of the airport, airlines and ground handlers.

“We will review the schedule changes that airlines have submitted in response to the government’s requirement to minimise disruption for passengers this summer and will ask them to take further action if necessary.

“We want everyone who is travelling through Heathrow to be confident that they will have a safe and reliable journey.”

Heathrow issued an apology to “any passengers who have been affected” by disruption, but added that “we have been able to provide a good level of service for the vast majority of passengers.”

The number of passengers who travelled through Heathrow during the first half of the year was 26 million, which is more than six times higher than the same period in 2021.

In terms of passenger numbers, Heathrow has recorded “the equivalent of 40 years of growth in just four months,” he added.

“I am very proud of the way that our team is rising to the challenge of growth, and giving excellent service to the vast majority of passengers.”

Calls by the committee to give the Civil Aviation Authority more powers to better protect passengers were “noted,” but no update was given on when progress will be made.

Mr Merriman said: “The pandemic highlighted several holes in consumer rights around travel but today’s disappointing response will not offer any comfort for travellers.

“This response is poor on consumer rights, poor on refunds, poor on progress on airline insolvency reform and poor on preparation for future health crises.

“Recommendations to provide peace of mind and consumer redress for travellers have been rejected.

“The regulator has to apply to court to get compensation redress for passengers.

“It cannot be right, for industry and consumer, that the regulator is still in court four years on from a series of flight cancellations.

“In other countries, the compensation would have been immediate.”’