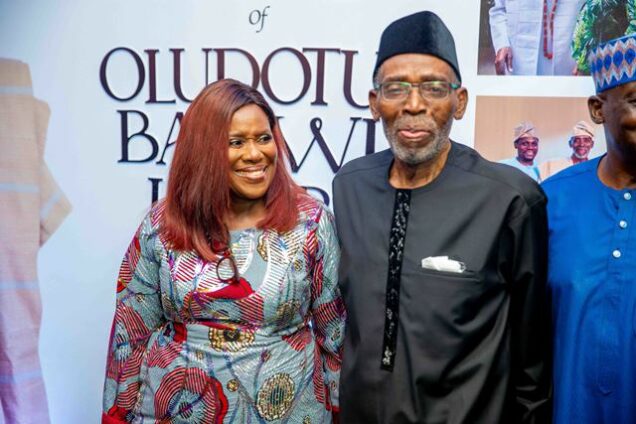 She made this revelation at the 80th birthday ceremony of her husband and legendary actor, Mr. Olu Jacobs, which held on Sunday 10 July, 2022 at Glover Memorial Hall, Victoria Island, Lagos.

It was also double celebration for the multiple award-winning actress. Aside from it being the day her husband’s 80th birthday was celebrated, it was also the day Glover Memorial Hall which the Lagos State Government had concessioned to Lufodo Productions in 2021 was inaugurated.

An historical monument, Glover Memorial Hall was built in 1887 on a piece of land donated by Madam Tinubu and named in honour of Sir John Glover, the then Governor of Lagos Colony. Not only was it built to be the place for Lagos social life and as a cultural hub, notable artistes such as Kola Ogunmola, Oyin Adejobi, and Hubert Ogunde premiered their productions at the hall. The first film in Nigeria was also screened there.

“Winning the bid for Glover Memorial Hall is like everything has come together. We have our own space where we can make theatre a part of conversation in nation building,” Silva recalled.

Expressing her appreciation to the Governor on many fronts, Silva said he had come to her rescue twice. The first time, according to her, was when she was in dire straits and needed to pay some money to the Lagos State Government but couldn’t. However, when she pulled a call through to the Governor, informing him about her problem, he rallied around her and bailed her out.

“The first person I would like to thank is the Governor of Lagos State, Babajide Sanwo-Olu. I thank him on many fronts. I thank him because there was a time when things were just so hard and I needed to pay quite a bit of money to the Lagos State Government. And I called him. I said, ‘Sir I know I have to pay this money. But I can’t afford it. So please what can I do? I beg you. I have bills uncountable. Help me.’ And he helped me,” she said.

The second time, the Governor came to her rescue was when the equipment worth N12 million; the Lufodo Academy for Performing Arts set up in a rented apartment at City Hall was destroyed during the #EndSARS protest that rocked the country in 2020. She called on the Lagos State Governor again and he bailed her out by sending back the rent she had paid for two years.

“Our school, Lufodo Academy for Performing Arts had been closed down since 2017. And we were kind of gathering all the resources together to start again. Finally, we got a place at the City Hall. And my darling sister, Lero Alija, gave us all kinds of equipment to the tune of about N12 million. So we were set up. The following weekend we were going to announce to everybody that we were back and everybody should start applying for training.

“And then EndSars happened. They took every single parts of the equipment, they broke every single toilet, they broke everything, there was no way we could start again. We had just paid the year’s rent. And so I called the Governor again. I said ‘Sir help me.’ And he sent back my rent of two years. He did. Governor Sanwo-Olu, thank you.”

Silva also said the reason Lufodo productions won the bid for Glover Memorial Hall fair and square was because of a strategic relationship they had had with Ciuci Consulting, adding that though they faced some problems initially, which almost made them pull out, Ciuci stuck with them.

“When it was time to bid for this place, one of our board members said the way this thing is going, everybody wants Glover Memoria Hall. We had an open bid. And we set it up. It was won fair and square. Lufodo Productions won this theatre fair and square.

It was indeed an evening of appreciation, thanksgiving and tributes. It was also an evening of music, dance and drama skits. Not only did dancers and drummers thrill the august gathering with their skills, a documentary celebrating the life and times of the legendary actor who just turned 80 was also screened.

Popular comedian, Ali Baba Akpobome, who anchored the event so well was in his element as he spiced it up with rib-cracking jokes and his wealth of knowledge of the Nigerian entertainment industry. In the documentary crystalizing the achievements of the legendary actor, prominent actors and theatre practitioners pay befitting tributes to him.

Legendary Nigerian actor, Taiwo Ajai-Lycett, for instance, described Jacobs as an amazing actor who knows how to communicate and interpret the words and has the ability to imbue words with their true meanings. Describing him further as an actor’s actor, brother, friend and fellow thespian, Ajai-Lycett said he was proud of him because he had left his mark not only in theatre but also in the sands of time.

“Whatever it is we’ve done behind us counts for where we are. He should be very happy, he should be very proud of himself that at 80 he has a body of work and experience. It’s being a journey and indeed you have been victorious. You have tamed the beast, ” Ajai-Lycett said.

Tejumola T., extolling Jacobs’ sterling qualities as an actor said: “You need to see Uncle J work. The good thing about stage plays is that you start from rehearsals. And you see him act on the words. And you see him beginning to put all the nuances in his performance.”

Silva, on her part, went down down memory lane narrating how she met her husband whose name preceded him – and still precedes him -at the time. According to her, she first met Jacobs while they were rehearsing Professor Wole Soyinka’s play, Jero’s Metamorphosis at the National Theatre, Iganmu, Lagos.

“And everybody was talking about this man who was coming from England, called Olu Jacobs, that he was going to play Jero, And there was excitement. We all spoke about him. I was looking forward to meeting this Mr Olu Jacobs. We were in rehearsals one day and I was told to go call Ms Enem. And I opened the door, I just heard this incredible voice that went ‘Wow, This is the woman I am going to marry,'” Silva said.

The multiple-award winning actress said not only was she taken aback by Jacob’s statement, but was angry at him for what she considered an affront. “He was just such a wonderful person to work with. He realized that he had made a faux pax and so he tried to get into my graces after that. We became extremely good friends,” Silva recalled.

Tejumola also narrated how Jacobs came late to their (the Jacobs’) wedding ceremony and everybody had to wait for him before the wedding could proceed. “Joke, was there, the priest was there, friends were there, but Olu was not there,” he said.

Silva, however, added that when Jacobs later came, he apologized, hinging his lateness on having overslept the night before, after a party. “He apologised profusely. What happened? He said they had partied into the early hours of the day. They all fell asleep. And the people who were supposed to wake him up didn’t wake up at the time. He woke up at 9:30am and just started screaming. He woke everybody up,” she said, noting that they did the white wedding and the engagement/traditional wedding on the same day.

Richard Mofe-Damijo, who was the Master of Ceremony at the wedding reception said he still had fond memories of his interactions with the legendary actor with whom he had played father/son roles on set. “Apart from sharing the stage with him, I also shared the script with him.” he noted.

Olusoju Jacobs, son of the celebrant, described his father as a gentleman, a family man and as someone who put his family first at all times regardless of what is happening. He also spoke about the caring nature of his father, how he made sure not only did they grow up to become good citizens but also well groomed. “He was always particular about making sure that the way you present yourself is very important,” Olusoji said.

Afolabi Adesanya, on his part, said Jacobs is the epitome of a good actor, what with his baritone voice. “People look up to him for inspiration, for guidance. When you see him interacting on set it is not just about throwing lines back and forth. It is about learning one or two things from him.”

Rogers Ofime said he had watched Jacobs right from when he was a kid and later had the opportunity to work with him on set, adding that the celebrant is a thespian who is always right on time. “He never misses his scripts, never misses his lines and, most important, he is always ready to help young actors,” he recalled.

Kate Henshaw, who looked ever young and radiant, spoke about the legendary actor’s concern for details such as pronunciation and diction. “For him pronunciation is very important. And he would listen to you, rehearse with you. Before you go on set he would say ‘Why don’t you try it this way or read it that way?’ He is someone who cares about you. Who cares about the body of work we are about to put out so that there are no issues.”

Jahman Anikulapo, journalist and former editor of The Guardian on Sunday, said he never realised the importance of the celebrant until he saw how he was treated with so much aplomb, reverence and awe by a mammoth crowd in Sierra Leone, as though the whole of Sierra Leone came to a standstill.

“Surprisingly for me. I don’t think I realised the importance of Olu Jacobs until I was outside this country. I was somewhere in Sierra Leone, at the airport, I sat down with some Nigerians. We were sitting down there. We didn’t know that Olu Jacobs was sitting in another room. And the moments the passengers saw this man, it was like the whole of Sierra Leone came to a standstill,” Jahman enthused.

It was indeed an unforgettable evening, as the crowd that thronged Jacobs’ 80th birthday ceremony is a testament to not only his greatness but also his invaluable contributions to the development of the Nigerian film industry and theatre.

And Silva, who was full of appreciation ended the evening on a rather emotional albeit positive and hopeful note when she spoke directly to her husband, whom she fondly called ‘Omo Boy.’

“You have been an amazing person, my darling. This is 80 years. God will give you many more. and you will get stronger, my darling. You will endure your winter, just as you have endured the spring, the summer, the autumn,” she said, and burst into a song in Yoruba, glorifying God for all the good things He has done for her.