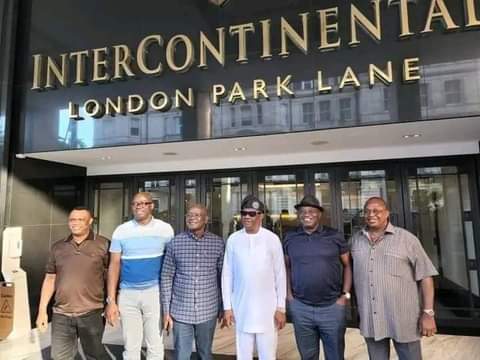 Also present at the meeting were Senator Olaka Nwogu and Chief Dan Orbih.

The outcome of the meeting was not made public but sources reported that it was based on the post-drama of the PDP presidential election that saw Atiku Abubakar emerge and picking Governor Ifeanyi Okowa as his running mate instead of Wike who was recommended by the majority of PDP NWC.

It was reported that the meeting was able to decide the conditions that will be put before Atiku to earn the support of PDP members who are against his candidacy.

Benue State Governor, Samuel Ortom, had said he has not received direction from God to support Atiku.

Ortom in an interview with Arise Tv on June 29 said;

“I am praying. I have gone into hibernation. I am fasting and praying. So in the end, if God directs me that I should support Atiku, why should I not do it? After all, he’s my party member.”

Ortom added that he had expected Atiku to have chosen Rivers State governor, Nyesom Wike, as his running mate instead of Ifeanyi Okowa, Delta state governor.

Ortom also declared his support for Governor Wike and urged Atiku to talk to the Rivers State governor.

“But I am waiting for him (Atiku) to do more. I expect him to reach out to Wike, who came second in the presidential primary,” Ortom said.

Wike contested and lost the PDP presidential ticket to Atiku.

The NWC members voted 13-3 to endorse the report of the stakeholders’ panel which had earlier nominated Wike to be Atiku’s running mate. Okowa got only three votes.