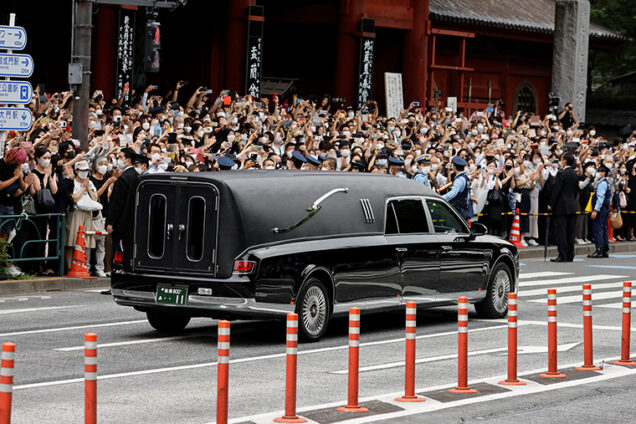 A vehicle carrying the body of the late former Japanese Prime Minister Shinzo Abe, who was shot while campaigning for a parliamentary election, leaves after his funeral at Zojoji Temple in Tokyo, Japan July 12, 2022. REUTERS/Issei Kato

Japan’s former Prime Minister, Shinzo Abe, who was assassinated during a rally will be cremated today as his funeral held in Tokyo.

Abe, was a polarising figure who dominated politics as the country’s longest-serving premier, before being gunned down at a campaign rally last week Friday. Police said investigation into his gruesome murder is ongoing.

The suspect, Tetsuya Yamagami, was arrested at the scene but has not been formally charged.

Abe was Japan’s longest-serving prime minister before he stepped down in 2020 citing health reasons.

His widow, Akie Abe, according to CNN, was seen traveling in the front seat of the hearse carrying his body, following his funeral on Tuesday.

Abe’s funeral was held at Tokyo’s Zojoji Temple, with family and people who were close to the former prime minister in attendance, Japan’s public broadcaster NHK reported.

The hearse carrying Abe’s body will travel from the temple to the Kirigaya Funeral Hall for cremation, passing by a number of significant buildings including the Prime Minister’s office and the Parliament building.

A large crowd lined the streets to bid him farewell as many seen weeping profusely.

Japanese bid him farewell with prayers, flowers and flags draped in black ribbons.

Reuters reports that crowds packed pavements lined with a heavy police presence as the hearse carrying Abe departed from a central Tokyo temple in early afternoon. People shouted, clapped and waved as it passed, with some holding flowers.

Hundreds filed into the temple on Monday evening and Tuesday morning to pay their respects to Abe, who died aged 67. His killing on Friday by an unemployed man wielding a homemade gun stunned a nation where both gun crime and political violence are extremely rare.

The funeral ceremony, limited to family and close friends, was closed to the media. Abe’s widow, Akie, was chief mourner.