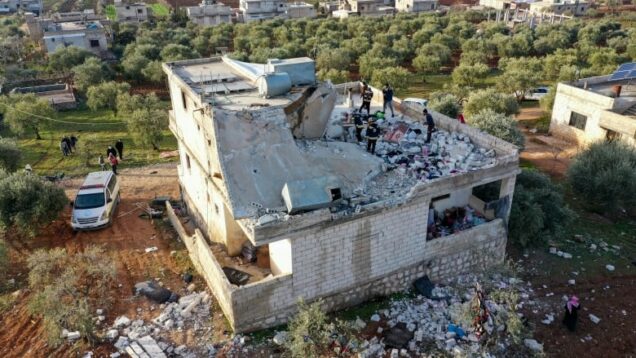 The leader of Islamic State in Syria, Maher al-Agal has been killed in a U.S. air strike, the U.S. military said on Tuesday.

Al-Aqal was one of the top five leaders of the militant group, U.S. Central Command claimed.

In a statement, the command said Maher al-Agal had been killed in a drone strike in northwesten Syria and a close associate of his was seriously injured.

“Extensive planning went into this operation to ensure its successful execution. An initial review indicates there were no civilian casualties,” the statement added.

It said al-Agal was responsible for developing ISIS networks outside of Iraq and Syria.

It would be another blow to the Islamist insurgent group’s efforts to reorganize as a guerrilla force after losing large swathes of territory.

The United States has roughly 900 troops in Syria, mostly in the east of the country splintered by a decade of civil war, although President Joe Biden’s administration has yet to detail its long-term plan for the eight-year-old mission.

The Syrian Civil Defence, a humanitarian organization operating in opposition-held areas, said an unidentified drone targeted a motorcycle in the village of Khaltan in the northern countryside of the Aleppo region, killing two people.

The U.S. military did not mention a motorcycle in its statement but said a senior ISIS official closely associated with Maher was seriously injured during the strike.

In February, the top leader of Islamic State blew himself up during a U.S. military raid in Syria.

At the peak of its power from 2014-2017, Islamic State ruled over millions of people and claimed responsibility for or inspired attacks in dozens of cities around the world.

Its leader, Abu Bakr al-Baghdadi, declared a caliphate over a quarter of Iraq and Syria in 2014, before he was killed in a raid by U.S. special forces in northwestern Syria in 2019 as the group collapsed.

The U.S.-led coalition fighting Islamic State said in mid-2019, after the group’s battlefield defeat, that it retained 14,000 to 18,000 members, including 3,000 foreigners, though precise numbers are as elusive as ISIS itself.

“ISIS continues to represent a threat to the U.S. and partners in the region,” a U.S. Central Command spokesman said in the statement about the drone strike.

Analysts say many local fighters may have slipped back into normal life, ready to re-appear when an opportunity emerges.