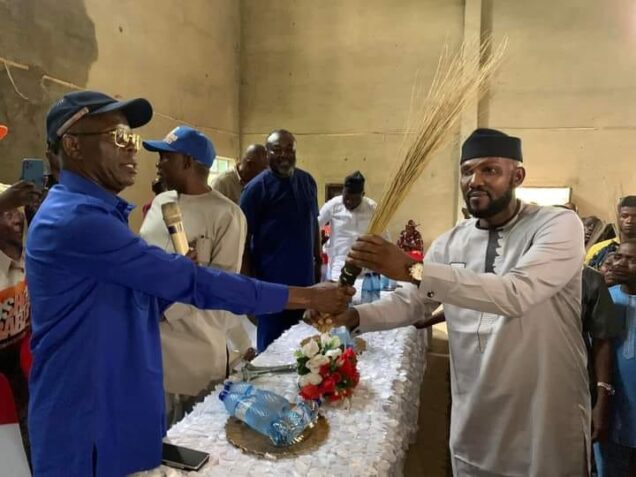 Akin Agbaje, a former commissioner for energy in Edo under Governor Godwin Obaseki has returned to the All Progressives Congress, APC.

Agbaje was received by former national chairman of APC, Adams Oshiomhole, on Sunday at his home in Igarra, Akoko-Edo Local Government Area of Edo State on Sunday.

Speaking at the event, Oshiomhole warned political leaders against what he described as institutionalisation of poverty among the citizens.

He said: “We have gotten to a point that all Nigerian leaders that are in politics and in business must recognise that we must build and rebuild a country worthy for all.

“We are not relying on what statisticians tell us. If they say our economy is growing at 20 percent per week, we must ask the question, is the pieces of meat on our table increasing by 20 percent every month? If it is not, something is wrong.

“At this age, I have a duty to my country to identify others to rebuild the ladder which made it possible for me as the son of a farmer in a village that was not on the map to go to school without fees and grow to become the governor of this state.”

The former Edo state governor alleged that the government of Governor Godwin Obaseki had received N16 billion from the federal government as a refund for the federal roads that his (Oshiomhole’s) administration constructed, adding that such money ought to be used to construct more roads for the people.

This is even as he cautioned that constituency projects appropriation should be for the benefit of the entire community and not for a few.

According to him, “Parliament is not about buying two motorbikes called constituency projects given to two youths out of about 4000 youths. It isn’t about buying small 20 grinding machines to give to about 20,000 women.

“I warned against what I called celebration and institutionalisation of poverty.

“In the Senate, we must ensure that in making appropriation, we do it for the benefits of the people.

“If we make that road that crosses Akoko-Edo that I built when I was a governor and many other too, which of course I am aware that the federal government has refunded the money to my successor worth about N16 billion, such can be further used to making more roads for our people. We must rebuild that road which was destroyed because of the failure of federal government roads.

“That will not be a favour but pending duty. That is why your senator should sit on the floor of the senate and insist that the agenda of the Edo North cannot be down-played.”

Earlier in his remark, Agbaje who was the then Director of Obaseki Campaign Organisation during the 2020 governorship election, described his return to the APC with hundreds of his supporters as coming back home to roost.

He vowed to join hands with other leaders of the party to comb Akoko Edo for victory in next year’s general election.