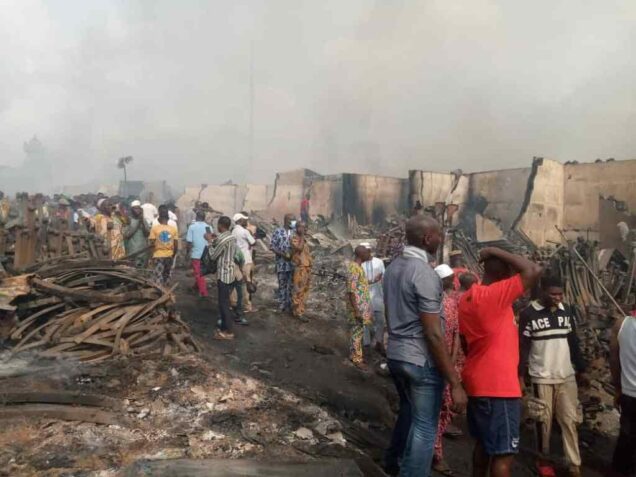 FILE PHOTO: Aftermath of a fire incident at the Bodija Market

The Oyo State Fire Service said the Monday morning fire incident at the Bodija Market in Ibadan, was aided by several kegs of petrol stored in some of the shops.

The agency’s Director of Operations, Mr Ismail Adeleke, made this known on Tuesday in Ibadan.

Adeleke, however, said that agency was still investigating the main cause of the fire incident.

According to him, one Ayo Akeredolu from Yemetu Police Station, Ibadan, called at exactly 5.35 a.m. on Monday to inform the agency about the inferno.

“We responded quickly with a 27,000-litre capacity truck with water to the market and started putting the fire under control.

“Another 10,000-litre capacity truck also joined in our operation to finally put off the fire.

“However, in the course of our operation, we discovered that grinding machines were in most of the shops with some kegs of petrol, which contributed to the spread of the inferno.

“But, we thank God that we were able to put off the fire before it spread to the fourth block,” he said.

Adeleke said that further investigation would reveal the main cause of the inferno.

He, therefore, cautioned residents, especially traders to desist from careless storage of inflammable substances, not minding the scarcity of petrol as currently being experienced in the state.

Three blocks, comprising 11 lock-up shops per block, situated at Ori-Igi Lane in the market, were affected by the fire.

Property worth millions of naira were also estimated to have been razed down by the inferno.