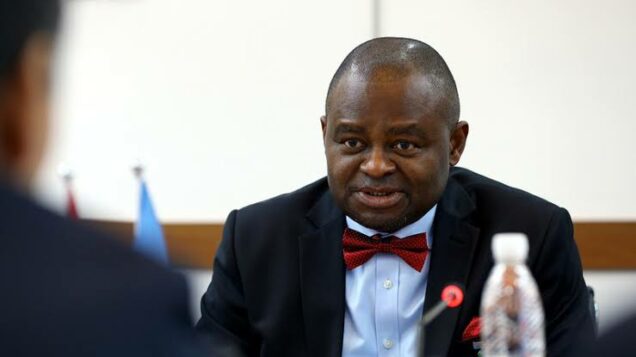 UN Secretary-General António Guterres has appointed Ozonnia Ojielo of Nigeria as the United Nations Resident Coordinator in Rwanda, with the host Government’s approval.

The Deputy Spokesman for the Secretary-General, Farhan Haq announced the appointment at a news conference at UN headquarters, New York on Tuesday.

“As you know, Resident Coordinators are senior UN officials who are leading our work on the ground to rescue the Sustainable Development Goals (SDGs) while supporting ongoing national COVID-19 response and recovery programmes,’’ he said.

Ojielo brings to the position more than 25 years of experience in sustainable development work, including experience overseeing a global portfolio of programmes and projects with the United Nations in Central Asia and Africa that covered four continents.

He also took on other senior roles with UNDP in Kenya and Ghana.

Prior to joining the United Nations, he was an attorney, university teacher, journalist and advised truth, justice and reconciliation as well as human rights commissions in Ghana, Liberia, Malawi, Namibia and Sierra Leone.

He also served as the President of the Centre for Peace in Africa, a regional non-profit in Nigeria, and is the founder and first president of The Institute of Chartered Mediators and Conciliators, the largest mediation and conciliation organisation in Africa.

Ojielo authored numerous scholarly and technical publications and holds a PhD in Peace and Conflict Studies from the University of Ibadan in Nigeria.

He holds Masters degrees in Strategic and Project Management from the Paris Graduate School of Management in France, as well as, in History from the University of Nigeria, Nsukka.

Ojielo holds a Bachelors degrees in History and Law from the University of Nigeria, Nsukka and ASUTECH respectively, both in Nigeria.