No handshakes as Joe Biden begins homecoming visit to Israel 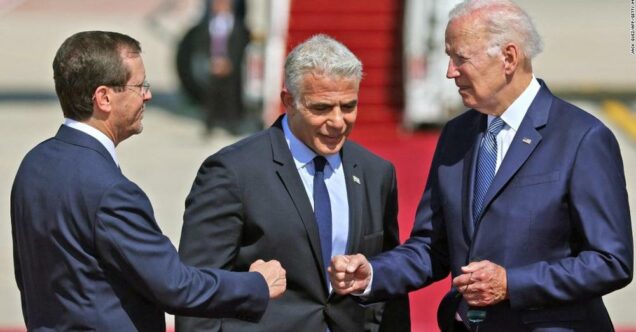 Israel embraced U.S. President Joe Biden as an old friend on Wednesday at the start of a high-stakes visit dominated by efforts to bring Israel closer to Saudi Arabia.

Landing at Ben Gurion Airport, whose runway he first trod in 1973 as a senator, Biden bumped fists with Israeli Prime Minister Yair Lapid.

In a speech, he described the connection between the two nations as “bone-deep”.

“You do not need to be a Jew to be a Zionist,” Biden added, voicing support for the ideology behind Israel’s foundation on lands with ancient Jewish roots, and which is deeply resented by many Palestinians.

Biden also reiterated a U.S. desire for negotiations, stalled since 2014, for Palestinian independence in Israeli-occupied territory, calling this two-state solution “the best hope”.

After separate meetings with leaders of both sides, Biden will on Friday fly on to Saudi Arabia, where he will attend a summit of Gulf allies. Under pressure at home to bring down soaring gasoline prices that have damaged his approval ratings, he is expected to press for expanded oil production.

Biden’s first trip as president to Israel – which, in a TV interview, he described as “kind of like going home” – is his 10th of a long political career. Biden entered the White House 18 months ago.

In a welcoming speech, Lapid called Biden “one of the best friends Israel has ever known”. But Israel and the United States have at times been divided over Iranian nuclear diplomacy and Palestinian statehood prospects.