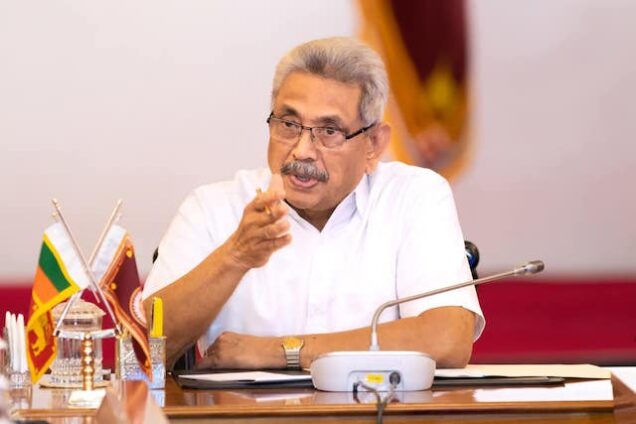 The Rajapaksa dynasty dominated Sri Lankan politics until April when street protests against fuel and food shortages began to slip out of control.

President Gotabaya Rajapaksa fled the country early on Wednesday, leaving no one from the once-illustrious family in a position of power.

The president vowed last month to stay on until his five-year term ended in 2024, despite the anger his tenure prompted among the people.

Thousands of Sri Lankans stormed his official residence on Saturday, forcing him to go into hiding and agree to step down. He was to have done so on Wednesday.

“One day this had to happen,” said Mallawaara Arachchi, a 73-year-old retired engineer, as he wandered around the official residence of the prime minister last occupied by Rajapaksa’s elder brother, Mahinda, and now also by protesters.

“They have robbed everything from the people,” he said. But with the family gone “we will be the best country in the world in the near future”.

Mahinda resigned in May, thus ending his son Yoshith’s stint as chief of staff. His other son, Namal, elder brother Chamal and younger brothers Basil and Shasheendra quit as ministers in April.

Former finance minister Basil, who also holds U.S. citizenship, was stopped at the airport from fleeing the country on Tuesday by immigration officials wary of the public response if he had been allowed to leave.

The country of 22 million has barely any dollars left to import fuel, it has defaulted on billions of dollars of foreign loans, headline inflation hit 54.6% last month with more dire predictions, while schools and offices stay shut to conserve petrol and diesel.

It is the most debilitating political and economic crisis to hit the country since independence in 1948, including during a brutal civil war in which Gotabaya Rajapaksa, as defence secretary, oversaw the crushing of Tamil Tiger insurgents in 2009.

Much of the blame for the crisis has been placed on the COVID-19 pandemic that squeezed out the island’s tourism industry and dried up remittances from Sri Lankans overseas.

The Rajapaksas’ tax cuts left a hole in state revenues and a ban on chemical fertiliser damaged crops before it was lifted.

Talks with the International Monetary Fund for a rescue package could yield results later this year or next at the earliest, prompting Sri Lanka to seek even more aid from neighbours India and China.

Sri Lanka’s parliament will elect a new president on July 20.

Prime Minister Ranil Wickremesinghe has also offered to resign, and if that happens, the parliamentary speaker will be the acting president for a few days as per the constitution before the election is concluded.

“Unless both the president and the prime minister resign we are looking at prolonged instability. What we have seen so far will be nothing compared to what could happen.”