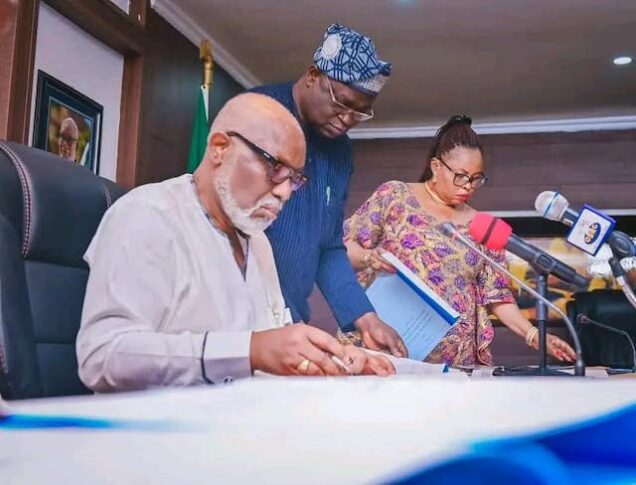 Governor Oluwarotimi Akeredolu has signed into law the first amendment to the Ondo State Security Network Agency Law, which establishes the Amotekun Corps.

The Governor, who assented to the bill at the State Executive Chamber of his office, noted that the new amendment became imperative in light of the heightened insecurity across the state.

He did not give details about the amendment.

But he assured that the amended Law will enhance the security architecture of the State and help the Amotekun Corps to perform better.

Special Adviser to the Governor on Security, Akogun Adetunji Adeleye appreciated Governor Akeredolu for assenting to the amendment to the Amotekun law.

He assured that the development will scale up the operational capacities of the state security outfit.

He used the occasion to announce the procurement of new vehicles to be distributed to all security operatives in the state including the Nigerian Police, Nigerian Army, Directorate of State Security and Amotekun Corps to fortify the performances of security agencies in the state.

Addressing Government House Reporters at the end of the Council meeting, the newly reassigned Honourable Commissioner for Information and Orientation, Mrs Bamidele Ademola-Olateju regretted that one more death has been recorded as a result of the June 5 terror attack on St Francis Catholic Church,Owo.

She said the number of fatalities is now 41 while 17 persons were still being hospitalised.

While commiserating with the bereaved families and praying for speedy recovery of those still in the hospital, the Commissioner restated the commitment of the State Government to having a memorial site built in honour of all the victims.