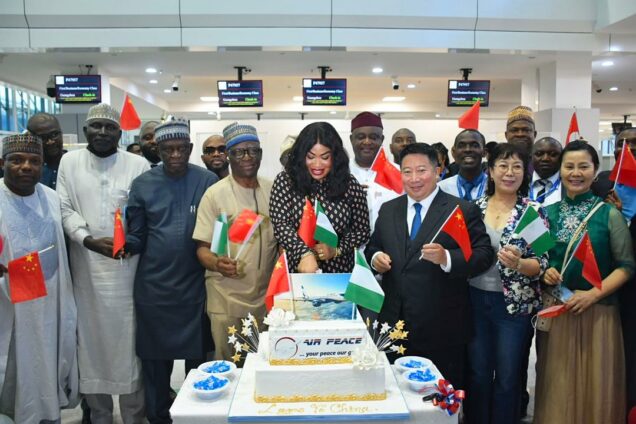 Air Peace has officially commenced operations into Guangzhou-China, becoming the first Nigerian airline to fly into the Asian country once every week.

Chief Operating Officer, Air Peace, Oluwatoyin Olajide, made this known at the airline’s inaugural flight to the East which was held at the new Murtala Muhammed International Airport Terminal in Lagos on Wednesday evening.

Olajide said the airline would commence flights to Mumbai, India and Tel Aviv, Israel as soon as possible.

She added that the airline had kept its word regarding its expansion plan and affordability.

Olajide said, ”When we set out for the Air Peace trajectory in 2014, we envisaged an airline that would predominantly do two things.

“The first is to create massive employment for Nigerians and reduce the burden of air travel for Nigerians, and by extension, Africans, through the provision of affordable and peaceful connectivity across cities and continents.

“Now, we can confidently assert that Air Peace has kept to this vision of providing seamless connections and expanding existing network to accommodate the evolving air travel needs of the flying public.

“Today, we’re officially adding the continent of Asia to our network of continents, with the commencement of initial one-weekly flight to Guangzhou-China.

“If you’ve been following the growth of Air Peace, you’ll be familiar with the fact that the Chinese airspace is not new to us.

“We have successfully operated several evacuation/special flights to the country at different times in the past, especially in 2020, during the COVID-19 lockdown.

” So, we’re going into China, not as newcomers, but as an airline that is technically and operationally acclimatised with the Chinese terrain.”

She noted that the flying public, especially those that fly the Guangzhou route, should expect best-in-class flight experience, which was characteristic of the Air Peace brand.

Olajide said it had not stopped with Guangzhou as India was next and Israel was in the works.

According to her, also planned for subsequent launch are Malabo in Equatorial Guinea and Kinshasa in the Democratic Republic of Congo.

The airline’s official promised that the airline would continue to grow its route network and modernise its fleet strategically.

She said the airline appreciated the Nigerian Civil Aviation Authority, Federal Airports Authority of Nigeria, the Ministry of Aviation, the Chinese government, its partners and other stakeholders for making this humongous feat possible.

Olajide promised that the airline would continue to work harmoniously with all relevant aviation actors to ensure this new route is maximised.