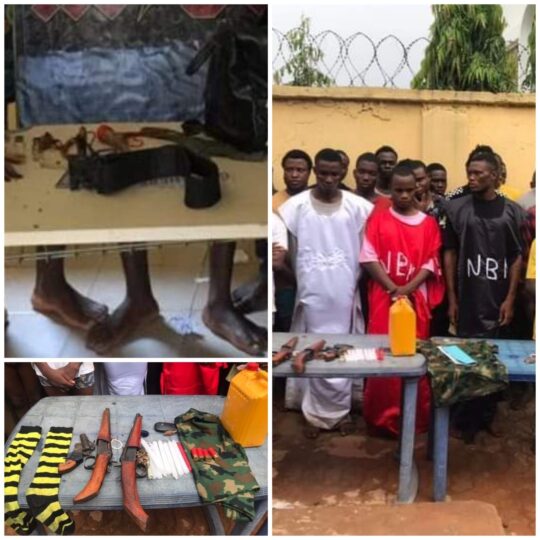 Members of Black Axe Confraternity arrested during their initiation at Zion Road, Ibusa community of Oshiomili LG of Delta state and the items recovered from them

A combined team of officers of Delta Police Anti-Cult Unit and vigilante groups have apprehended 25 members of the Black Axe Confraternity, also known as “AYES”, where they were having their initiation at Zion Road, Ibusa community of Oshiomili local government area of the state.

Some items were also recovered from the cult members who were arrested On July 10, 2022, spokesman of the command, DSP Bright Edafe, said in a statement on Thursday in Warri.

He said their arrest followed information to the Divisional Police Officer (DPO), Ibusa Police Station that the suspects were having their initiation at Zion Road, Ibusa.

Edafe added that the Commissioner of Police (CP) in the state, Mr Ari Ali, immediately directed SACU and the local vigilantes to raid their hideout.

“On July 10, 2022, at about 0130hrs, the DPO, Ibusa Police Station, got information that men of the Black Axe Confraternity, also known as “AYES”, were having their initiation at Zion Road, Ibusa.

“The CP directed a joint team of SACU, Ibusa division, and local vigilantes to apprehend the suspects.

“The team swung into action, raided their hideout and arrested 25 male suspects.