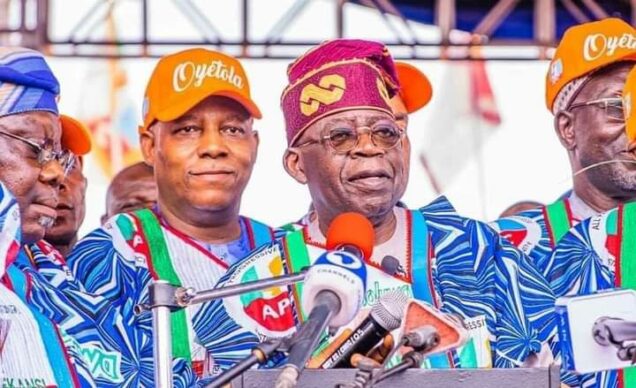 The Nigerian presidency has dismissed as false the report that the Department of State Services issued an advisory warning against a muslim-muslim presidential ticket.

In a statement Malam Garba Shehu, the senior special assistant on media to President Buhari, described the report as a ‘false story’.

“We wish to advise well-meaning Nigerians to ignore a laughably puerile report by an apparently pirate online newspaper seeking to sow division and chaos on the choice of Governor Kashim Shettima as the Running Mate of our Party’s Presidential Candidate, Asiwaju Bola Ahmed Tinubu.

“This so-called newspaper is like a deadly virus. Stay safe by keeping away from its toxic reports”, he said.

In a story published Friday, the People’s Gazette claimed to be privy to a report by the DSS which concluded that “Ahmed Tinubu’s decision to nominate a fellow Muslim as vice-presidential candidate for 2023 presidential election is a tailored recipe for renewed sectarian crises that could destabilise Nigeria”.

The report quoted sources but failed to authenticate it with any document.

“The document, which got to the president by way of the National Security Adviser Babagana Monguno, said Mr Tinubu should consider security implications of his selection before making it public, according to three officials briefed on the report.

“The SSS produced the report and handed a copy to the NSA,” an intelligence officer told The Gazette. “The NSA looked at the report and added it for security briefing to the president.’’

“Simply put, our understanding is that the alliance will destabilise Nigeria and embolden attacks on Christian citizens from their fellow Muslim citizens,” the official said.

“The distrust Christians are likely to harbour against a presidency occupied by two Muslims won’t make our work easy at national security level.”

The Presidency said Friday night that the report is nothing but a moonlight tale.