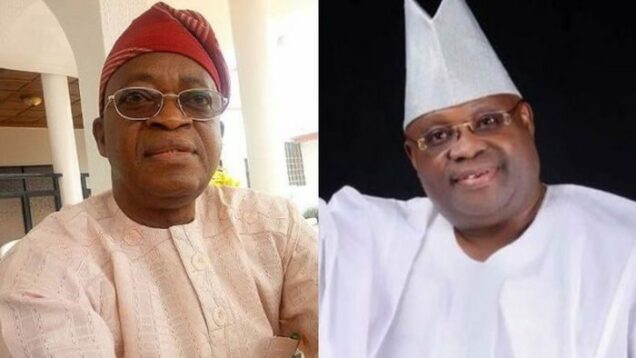 The Director General of the Campaign Council of Governor Adegboyega Oyetola’s re-election, Senator Ajibola Basiru has described as irresponsible the claim by the Peoples Democratic Party, PDP, that it has won the election, the result of which is being collated.

In a statement issued in Osogbo on Saturday evening, he noted that the claim by the PDP was capable of setting Osun on fire.

He, therefore, warned the PDP to desist from making a frivolous and unsubstantiated claim about an election, which, as we speak, voting is still going on in some areas.

He equally called on the security agencies to take appropriate action in dealing decisively with the peddlers of this false claim as they are setting the stage for violence and chaos.

“It has come to our knowledge that the PDP in a statement is already claiming victory for an election whose result is yet to be declared. We are not surprised at their claim because we know their antics.

“Going by the result so far declared, there was no way PDP could lay claim to any victory. This is more so that in one of the Local Governments where the PDP candidate hails voting is still going on as we speak.

“Therefore, the PDP’s claim is tantamount to standing logic on its head. We appeal to our supporters and sympathisers in Osun and across the country to remain calm in the face of this obvious provocation.

“While we won’t do what the desperate people in the opposition PDP did by usurping the powers of INEC, we are however confident that with the positive results from the field at our disposal, the people’s support for Gov Oyetola will ultimately give him victory when the authority legally empowered to announce election results does so and he is declared Governor-elect,” Basiru added.

Basiru was reacting to an earlier statement by Dr. Akindele Adekunle, caretaker chairman of Osun PDP, in which he claimed victory.

The Osun state chapter of the Peoples Democratic Party (PDP) has claimed victory in the ongoing governorship election , affirming that collated results from the polling units confirms PDP’s emerging victory at the poll.

In a statement issued at Osogbo on Saturday evening, the Caretaker Chairman of the party in Osun state, Dr Akindele Adekunle declared that the party has secured majority as well as more than two third spread across the 30 local governments and area office.

The party in the statement noted that the victory of the party at the poll is a product of mass mobilisation and grand coalition of people of Osun state against bad governance and insensitive leadership.

While thanking people of Osun state for endorsing and affirming Ademola Adeleke’s governorship bid, the party sternly warns against any attempt to tamper with the result of the election.

“We want to assert that Ademola Adeleke has won this election overwhelmingly going by results at our disposal. We warn against any plot by some agents of chaos to doctor the results. We specifically call on the Electoral commission to watch fifth columnists within its fold who may have been contracted for hatchet job. Osun people have decided and their votes must be respected”, the statement noted.

The party specifically called attention of the commission to a paid agent of the state government who is presently working round the clock to tamper with the results, vowing that any attempt to subvert the will of Osun people will be strongly resisted.