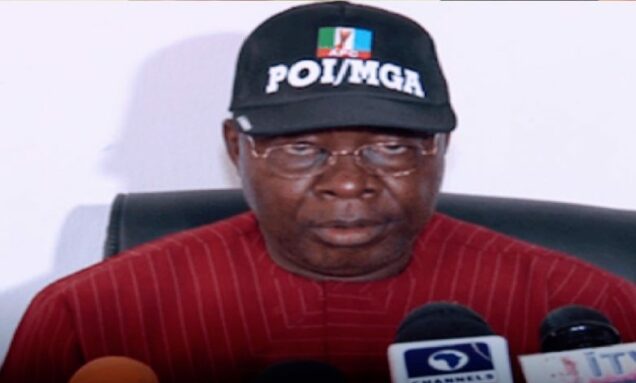 A motion challenging the jurisdiction of an Edo State High Court’s jurisdiction in hearing the N5 billion suit filed against the State Chairman of the All Progressives Congress (APC), David Imuse, has been dismissed by the court.

The Akwa Ibom State Resident Electoral Commissioner, Mr. Mike Igini, had filed the suit against Imuse, demanding the sum of N5 billion as aggravated damages for alleged libelous publications in three national newspapers against him before the 2020 Edo state governorship election.

But, having entered an appeal, Imuse through his Counsel, Austin Osarenkhoe, urged the High Court to stay proceeding through an oral application before the court.

He stated that when an appeal had been entered in an appellate court, it does not operate as a stay of proceeding in the lower court.

The defense Counsel further submitted that on that ground of the appeal, the High Court should stay proceeding, pending hearing on the case at the appeal court.

He cited citations and authorities as well as referred to relevant rules of the court of appeal to buttress his argument.

Onwuenwunor referred to order 4 rule 11 of the Court of Appeal rules for 2021, and the Supreme Court ruling between Justice Walter Onnoghen (Rtd) versus the Federal Government of Nigeria, with citations supplied and others.

He further argued that an appeal does not stand as stay of proceeding.

But in his reply on the point of law, Austin Osarenkhoe, argued that order 4 rule 11 of the court of appeal which was referred to by his lenient colleague does not avail him.

But, Justice Vesty Eboreimen, after listening to the arguments of Counsels to parties in the suit, dismissed the motion seeking to stop the hearing of the case.

He held that application for stay of proceedings ought to first be filed, noting that when an appeal has been validly entered, the application must be filed in the right format.

The Judge who relied on already decided Supreme Court cases, said, it is settled in law that an appeal does not operate as a stay of proceeding in the lower court.

Having given due consideration and recognitions to the authorities cited, Justice Eboreimen said, “I am satisfied that the court of appeal rule is quite explicit.

“An appeal even when it has been entered in an appellate court, does not translate to a stay of proceeding in the lower court.

“I have accordingly dismissed and discountenance the application of stay of proceeding orally moved by the Counsel to the first defendant. I call on the Claimant to continue with his case,” Justice Eboreimen ruled.

The court also dismissed the objection of the APC chieftain against the admissibility of video evidence sought to tender by the plaintiff, noting that it was germane and cogent for the plaintiff’s case.

Thereafter, the case commenced proper, with the claimant (Igini) testifying on statement of oath, admitted photocopies of the published Sun Newspaper on the press briefing.

Justice Eboreimen who adjourned the case to 3 and 4 August, 2022 for continuation of hearing, urged the plaintiff to put the second and third defendants on notice of the adjournment.