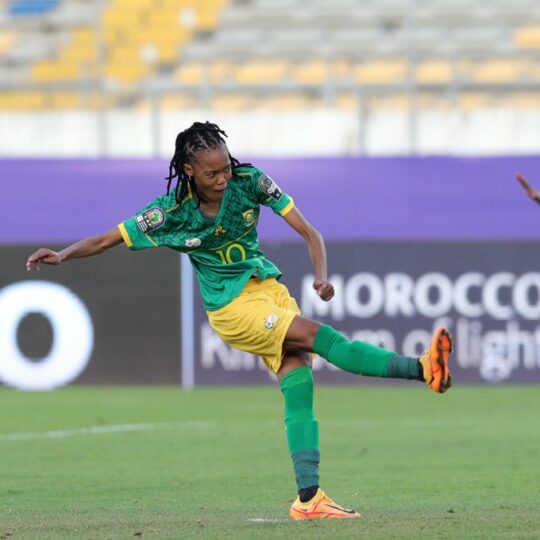 Linda Motlhalo scored a controversial penalty on added time against Zambia to send the Bayana Bayana of South Africa to the Women’s African Cup of Nations (WAFCON) final on Monday.

The match was heading for extra-time on four minutes added time when a South African player was fouled slightly outside the 18-yard box, with the player falling inside the box.

The referee blew the whistle for a penalty and everyone was shocked.

Motlhalo stepped in and scored the winner for South Africa.

The Zambians had dominated the match in the first half, losing several scoring chances, but paid the price of not converting their chances.

There have been outrage on Twitter over the controversial penalty that sent South Africa to the final of WAFCON,

Stallone Mudala added: “CAF is destroying football in Africa. Pure corruption behind the scenes of the game Zambia vs South Africa. That was not a penalty and it’s a shame that South Africa is going to play a final freely gifted to them by stupid referee.”

Kidown wrote: “The other day caf president packed all his daughters in caf women player of the year. As if that was not enough, the ref just favoured South Africa Bayana vs Zambia. Zambia didn’t deserve this. Up next Nigeria vs Morocco. We hope that the Super Falcons won’t be another victim?”

Thomas Phiri said “Again we are disappointed with African football and refereeing , South Africa vs Zambia..where on earth did the penalty come from ???”

AtalapkaofBenin added: “@CAFwomen the officiating of this Zambia vs South Africa match was so biased! How’s that a penalty? Not even a tackle and it didn’t even happen inside the box. This is bad for Africa women football.”