EFCC extradites FBI-wanted Olamilekan Fatade to US: Case against him 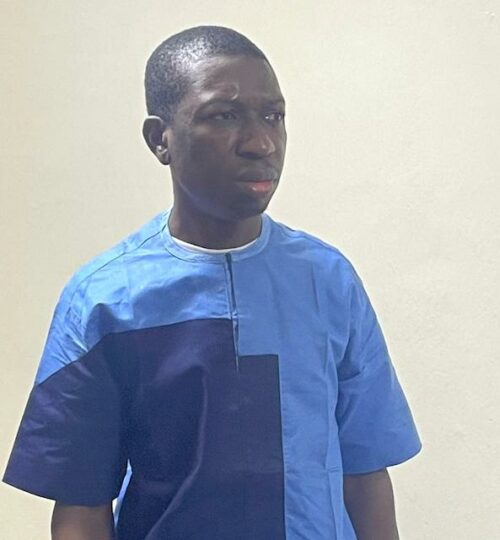 A wire fraud suspect, Idowu Olamilekan Fatade, who was on the wanted list of the Federal Bureau of Investigation, FBI, has been extradited to the United States for allegedly stealing over $3.5M worth of equipment in various cities.

Fatade’s extradition on 14 July was coordinated by the Economic and Financial Crimes Commission, EFCC.

He was received in the U.S. on 19 July, the Department of Justice in southern New York said.

His extradition followed a notice from the Federal Bureau of Investigation, FBI New York, through the US Legal Attache for his role in impersonating various cities, state and academic institutions across the United States.

Fatade was indicted by a grand jury in the Southern District of New York for offences of wire fraud, interstate transportation of stolen property and identity theft.

The suspect was arrested on September 30, 2021, by operatives of the EFCC and his extradition trial commenced sometime in November, 2021 before Justice Chukwujekwu Aneke of a Federal High Court sitting in Ikoyi, Lagos.

On May 1, 2022, the Judge granted the request to extradite the suspect to the United States to answer to the criminal charges against him.

Upon his arrival in the United States, the 40 year-old suspect appeared before a United States District Court judge in New York.

Damian Williams, the United States Attorney for the Southern District of New York, and Michael J. Driscoll, the Assistant Director-in-Charge of the New York Field Office of the Federal Bureau of Investigation (“FBI”), said Fatade was extradited on fraud and aggravated identity theft charges in connection with a scheme to fraudulently obtain and attempt to obtain millions of dollars of medical equipment, laboratory products, computer equipment and hardware, and other merchandise from suppliers of such merchandise across the United States by impersonating, among other individuals, procurement officials of U.S. state and local governments and educational institutions.

U.S. Attorney Damian Williams said: “Fatade Idowu Olamilekan is alleged to have carried out a sprawling criminal scheme to fraudulently obtain medical equipment and other merchandise. Olamilekan allegedly identified U.S. procurement officials, including the Chief Procurement Officer for New York, to then impersonate them and use their credentials to request millions of dollars in equipment shipments from various suppliers without advance payment. Olamileken has now been extradited to the U.S. for his alleged attempt to illegally profiteer from the worldwide pandemic.”

FBI Assistant Director-in-Charge Michael J. Driscoll said: “We allege Olamilekan impersonated state procurement officials during the height of the pandemic and stole critically-needed medical equipment that was in high demand and short supply. Fraud can have immediate and direct impacts on people, and we remain determined to bring those who commit it to justice.”

According to the allegations in the Indictment unsealed in Manhattan federal court:

From at least in or about 2018 through at least on or about September 14, 2020, OLAMILEKAN engaged in a scheme to fraudulently obtain and attempt to obtain millions of dollars of medical equipment, laboratory products, computer equipment and hardware, and other merchandise from suppliers of such merchandise across the United States by impersonating, among other individuals, procurement officials of U.S. state and local governments and educational institutions. In particular, during the coronavirus/COVID-19 pandemic, OLAMILEKAN impersonated the Chief Procurement Officer of New York State in an effort to fraudulently obtain medical equipment, including defibrillators. OLAMILEKAN engaged in the following conduct to carry out his criminal scheme:

First, OLAMILEKAN engaged in extensive research to identify specific procurement officials of U.S. state and local governments and educational institutions to impersonate and U.S. suppliers of medical, laboratory, and computer equipment to target as part of the scheme. This research included obtaining information about the current suppliers to the state and local governments and educational institutions OLAMILEKAN sought to impersonate and targeting those suppliers in order to avoid arousing suspicion. For example, OLAMILEKAN appears to have specifically targeted a medical supplier that was already providing medical equipment to New York State in or to avoid suspicion when OLAMILEKAN, who was impersonating the Chief Procurement Officer of New York State, contacted the supplier to obtain medical equipment.

Third, OLAMILEKAN used the spoofed email accounts to send emails impersonating the procurement official and seeking quotes for medical, laboratory, and computer equipment from targeted suppliers. These emails typically indicated that the payment terms would be “net 30 days,” which is a standard term of trade credit for government and educational entities that only requires payment for the goods within 30 days of delivery. OLAMILEKAN therefore impersonated the identities of procurement officials of government entities and educational institutions in order to exploit this industry standard and fraudulently obtain equipment without providing any advance payment information or deposit prior to delivery of the equipment.

Finally, once OLAMILEKAN received a response from a targeted supplier, he provided the supplier with a purchase order containing the forged signature of the impersonated procurement official and an address for a warehouse located in the United States for delivery and storage of the equipment purchased. Once the purchased items shipped to the warehouse provided by OLAMILEKAN, he typically had the warehouse re-ship the items to another warehouse and, ultimately, from the United States to locations in Australia, the United Kingdom, and/or Nigeria. OLAMILEKAN also coordinated with the warehouses receiving the shipments from the targeted suppliers using the stolen identity of at least one U.S. resident, thereby further concealing his own identity and avoiding detection of his criminal activity. Because payment was not due to the suppliers until 30 days after delivery of the equipment, OLAMILEKAN was able to take possession of the equipment prior to detection of the fraud, which typically occurred after payment was not received by the supplier within the 30-day period.