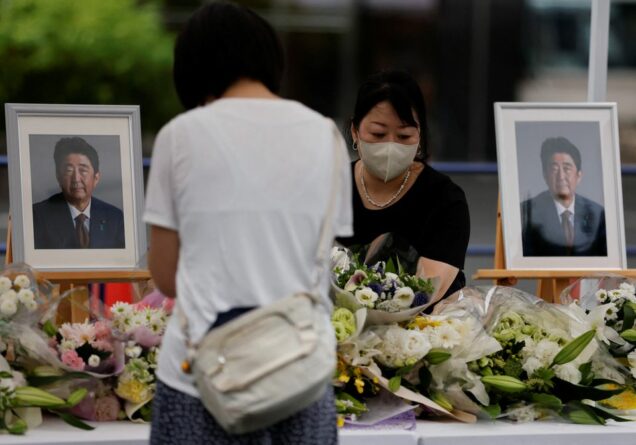 A mourner offers flowers next to pictures of late former Japanese Prime Minister Shinzo Abe, who was shot while campaigning for a parliamentary election, on the day to mark a week after his assassination at the Liberal Democratic Party headquarters in Tokyo, Japan July 15, 2022. REUTERS/Issei Kato

Japan plans a state funeral on Sept. 27 for former Prime Minister Shinzo Abe who was shot to death at a campaign rally this month, a government official and leading ruling party source said on Wednesday.

An official decision will be made at a cabinet meeting on Friday, they added.

The site will be the Nippon Budokan, an arena originally built for the 1964 Tokyo Olympic Games that has since been a popular venue for sports events and concerts as well as the site for a memorial service for World War Two dead held every year on Aug. 15.

Japanese Prime Minister Fumio Kishida said last week that Abe, 67, would be given a state funeral in recognition of being Japan’s longest-serving prime minister as well as his contributions to Japan and the world.

The last such state funeral for a former prime minister, in which the government bears full costs for the ceremony, was held in 1967 for ex-premier Shigeru Yoshida. Costs for more recent funerals were borne half by the state and half by the ruling Liberal Democratic Party (LDP).

The issue has set off debate throughout Japan, with opponents objecting to the use of tax money and others saying the LDP is making political use of Abe’s death.

An opinion poll conducted at the weekend by public broadcaster NHK found 49% of respondents in favour of the idea and 38% against.