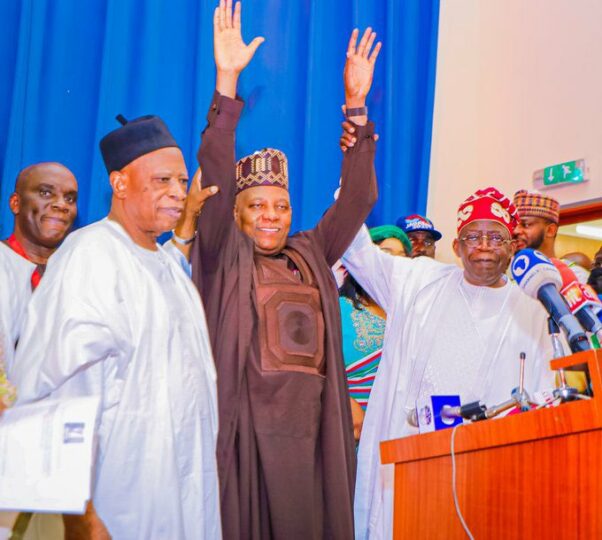 He is married to Nana Shettima and they have three children.

He studied at the University of Maiduguri and obtained a Degree (BSc) in Agricultural Economics in 1989.

He did his National Youth Service Corps (NYSC), at the defunct Nigerian Agricultural Cooperative Bank, Calabar, Cross River from 1989 to 1990.

He obtained a Master’s Degree (MSc) in Agricultural Economics in 1991 at the University of Ibadan.

Shettima joined the University of Maiduguri as a lecturer in the Department of Agricultural Economics from 1991 to 1993.

In 1993, he moved into the banking sector and was employed by (now defunct) Commercial Bank of Africa as head of accounts at the bank’s office in Ikeja, Lagos State from 1993 to 1997.

In 1997 he moved to the African International Bank Limited as a Deputy Manager and rose to become a Manager in 2001 before moving to the Zenith Bank as head of its main Maiduguri branch.

Shettima was later moved to the Ministries of Local Governments and Chieftaincy Affairs, Education, Agriculture, and later Health under Sheriff’s administration.

In February 2011, Shettima was elected as the All Nigeria Peoples Party (ANPP) Borno Governorship candidate after Modu Fannami Gubio, the candidate was shot dead by gunmen.

In February 2019, Shettima was elected as the Senator representing Borno Central at the National Assembly.

On July 10 Asiwaju Bola Tinubu, confirmed Shettima, as his running mate for the 2023 presidential poll on the All Progressives Congress (APC) platform.