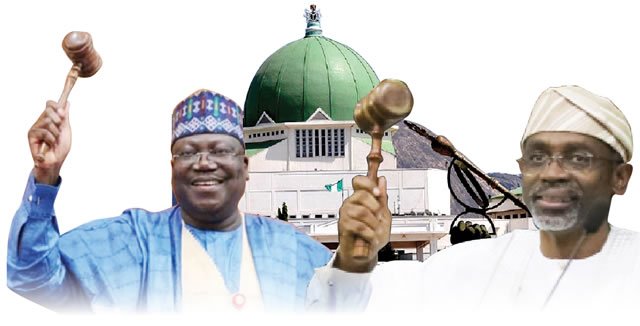 Senate President Ahmad Lawan, the Speaker of the House of Representatives, Rep. Femi Gbajabiamila, and former Senate President, Ken Nnamani will unveil a book on 100 years of legislative debate in Nigeria.

Mr. Onwubuya Breakforth, the Chairman of the public presentation and launching committee of the book, made this known in a statement on Saturday in Abuja.

He said the book, expected to be unveiled on July 28, is a compendium of legislative debates which started in 1922 when the new British conscripted Constitution introduced the Nigerian Legislative Council.

He said that it traversed through 1952 when the House of Representatives was later constituted.

“The work took account of the legislative journey of the Senate from 1960 when it was first constituted through the first, second, third republics and ended in the Fourth Republic.”

Breakforth said that the book also captured legislative activities of the House of Representatives within the aforesaid period.

“The Nigerian Legislature has come of age. It has progressed from a parliamentary system modeled along the British system to the American model of the legislature.”

He described the four-volume book titled: “Nigerian Legislature (1922 to 2022): A Centennial Compendium of Legislative Debates”, as telling Nigeria’s story from the legislative perspective.

“Unlike the history of Nigeria’s tribes and people which are heralded by several traditions – which most times are confusing and contradictory.

“This work exposes the realistic and authentic perspective of Nigeria’s journey, a first-hand account of events as they unfold.

“The book is authored by Dr. Tanu Ejenavwo, a renowned authority in the documentation of Nigeria’s life for posterity and contemporary studies.”

He said that for self-imposed responsibility and for the sake of the nation and humanity, the author documented the various spheres of Nigeria’s life in encyclopedic series.

He said the book would act as veritable resource material for scholars, adding that as part of the event the organizers would present Commemorative Awards to selected past and present members of the Nigerian Legislature.

Among those expected to receive posthumous awards are late Senate Leader Olusola Saraki, and Senator Nuhu Bamali, among others.

He listed past and present Senate Presidents and Speakers of the House of Representatives as part of those who would be commended with the commemorative awards.

He said that the event would be chaired by former Senate President Ken Nnamani, adding that it would be graced by other important personalities.

Other principal officers of the National Assembly, governors, former members of parliaments and civil society groups are also expected at the event.

The unveiling of the book will hold at NICON Luxury, Abuja.