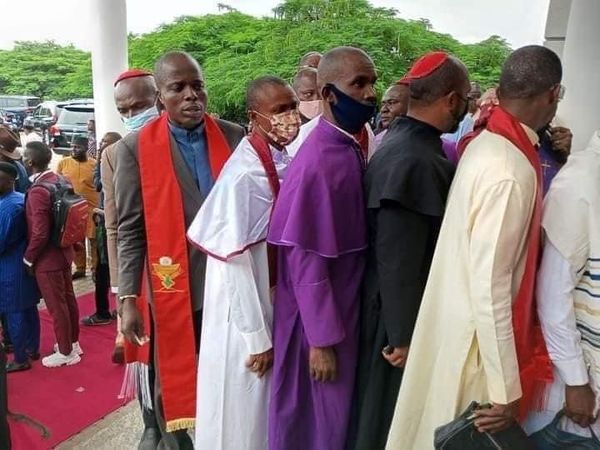 The Muslim Rights Concern (MURIC) said the leadership of the Christian Association of Nigeria are distancing themselves from reality and living in self-denial.

The Islamic organisation aired the opinion in its reaction to a statement credited to CAN that labelled several bishops and pastors who attended the unveiling of the vice presidential candidate of the ruling All Progressives Congress on Wednesday, 20th July 2022 at the Shehu Musa Yaradua Centre, Abuja as fake clerics.

This statement by the director of MURIC, Professor Ishaq Akintola reads;

“Despite the brouhaha over the Muslim-Muslim ticket of Senator Bola Ahmed Tinubu and Senator Kashim Shettimah, many bishops and pastors attended the unveiling of the vice presidential candidate of the ruling All Progressives Congress (APC) on Wednesday, 20th July, 2022 at the Shehu Musa Yaradua Centre, Abuja.

“In its own reaction, the Christian Association of Nigeria (CAN) yesterday described the bishops and pastors who attended the event as fake clerics. The Vice President of CAN in the the19 Northern States and Abuja who also doubles as chairman in Kaduna State, Rev. Joseph John Hayab, said Tinubu was free to ‘hire mechanics and other artisans and sew clerical garments for them.’

“Relying on fact checks published by a media house that confirmed the genuineness of the bishops and pastors, the Muslim Rights Concern (MURIC) has accused CAN leadership of distancing themselves from reality and living in self-denial. (https://pmnewsnigeria.com/2022/07/21/fact-check-are-bishops-pastors-who-attended-tinubus-unveiling-of-shettima-fake/).

“Going by the findings contained in this fact check, it is now very clear that leaders of CAN have distanced themselves from reality. They are living both in self-denial and self-delusion. They are pulling their followers by the nose. How low can a religious body descend? What does CAN stand to gain by deceiving its followers?

“Investigations have revealed the identities of many of the bishops whom Rev Hayab tagged ‘mechanics and artisans’. Three of these were :

“Bishop Kamoru who is from Lagos, is a real cleric from Peace Chapel, Mararaba. A picture has emerged where he was seen conducting a wedding in the church and some of his members have come up to say that they knew him personally.

“Reverend Father Hyacinth Alia, of Gkoko Catholic Diocese, Benue State. was also among the clerics whom CAN called fake. Father Alia is also the APC Governorship candidate in Benue.

“Pastor Prince Ugokwe, also confirmed that he is a real pastor and not fake.

“The identities of all the Christian clerics who attended the event have been revealed and none is fake. It is crystal clear from the above that CAN is not to be trusted. CAN disowns its own members who are not ordinary Christians but knowledgeable bishops and pastors. This shows that a caucus within the leadership of CAN has unleashed tyranny of the oligarchy on Christendom in Nigeria.

“The fact that several bishops and pastors dared CAN by attending the unveiling of the APC running mate in spite of directives by the umbrella Christian body to the contrary is also symptomatic of the hypocrisy and ineffectiveness of CAN’s noise over the Muslim-Muslim ticket. It is a toothless bulldog. CAN is long in rhetorics, and short in facts. It also proves that serious-minded and knowledgeable Christians who can differentiate between right and wrong no longer follow CAN’s instructions.

“It is noteworthy that the same leader of CAN in the North, specifically Rev. Joseph John Hayab, was the one who tried to deceive Nigerians by claiming that the man who attempted to bomb the Living Faith Church on Sunday, 2nd February 2020, was a Muslim whereas he was a Christian.

“Both the Nigerian Police, the accused himself, and his father later confirmed that the man’s name was Nathaniel Samuel, a confirmed church-goer. This incident is verifiable. MURIC does not fabricate stories. (https://guardian.ng/life/nigerians-react-to-the-news-of-nathaniel-samuels-attempted-suicide bombing/#:~:text=NATHANIEL%20Samuel%2C%20the%20Christian%20young,to%20bomb%20a%20COCIN%20church; https://dailypost.ng/2020/02/04/living-faith-church-bomber-nathaniel-samuel-not-first-christian-terrorist-in-nigeria-buharis-aide-onochie/; https://dailytrust.com/kaduna-bomb-scare-nathaniel-samuel-is-a-christian-not-muslim-suspects-father).

“The attendance of the unveiling of Tinubu’s running mate two days ago and the attempt by CAN to paint the Christian clerics who attended the event as a fake is another attempt by Nigeria’s Christian leaders to divide the country, whip up anti-Muslim sentiments and promote anarchy. CAN has shot itself in the foot. It insists that no Christian should vote for Tinubu’s party but it forgot that at least a Christian cleric is the gubernatorial candidate in Benue State. CAN should permanently close this can of worms and never open it again.

“Whereas Paul says, ‘Do not lie to one another’ (Colossians 3:9-10) Christian leaders find it expedient to pour torrents of lies on their followers. CAN leaders wilfully ignore the warning in Proverbs, ‘…He who breathes out lies will perish’ (Proverbs 19:9). Christian leaders are adept at crying wolf where there is none. They raise false alarm to cause confusion.

“It is good that this attempt has been debunked and CAN leaders exposed as pathological liars. We call the attention of Western embassies in Nigeria, particularly American and British embassies to these monumental falsehoods. These are the same Christian leaders who are invited by the American Congress to spread toxic information about Nigerian Muslims.

“We Nigerian Muslims are willing to peacefully coexist with our Christian neighbours but we are wary of the strong propensity of Christian leaders to tell lies from the pit of hell without blinking an eyelid.

“There have been so many instances in the past and, without doubt, many more to come so long as the West continues to give them listening ears without crosschecking the details and without caring to hear from the other side. The world is in grave danger if the champions of democracy continue to promote lopsided hearing.”