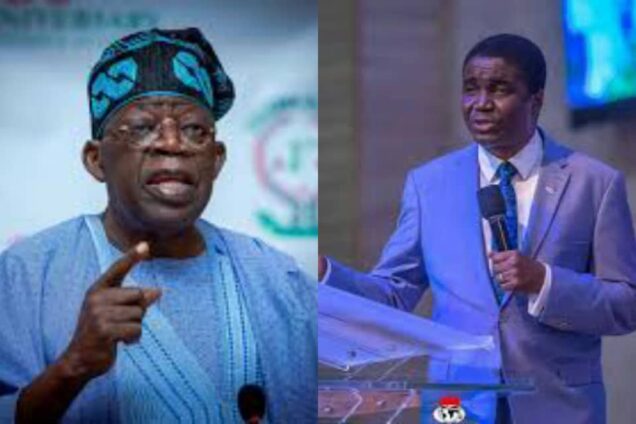 Bishop David Abioye, second in command at Living Faith Church Worldwide, is under fire over his inciting comment on Muslim-Muslim ticket being adopted by the All Progressives’ Congress (APC) candidate, Asiwaju Bola Tinubu.

Abioye, in a sermon, sought to instill fear in his church members that if they vote for party rather than individual, they are on their way to hell.

Such statement is never the gospel of Christ, which is the good news, but a hellish gospel that has no foundation in the scripture.

Abioye is saying that members of the APC in his church should not vote for their party and that if they do, they have betrayed the faith and are on their way to hell, thus fanning the ember of religious intolerance.

His statement has elicited anger and division in the church of God. A minister of God is called to preach the gospel of love and not hate and he has not taken his example from the Lord Jesus Christ he claims to serve.

He has forgotten that “For such an high priest (Jesus) became us, who is holy, harmless, undefiled, separate from sinners, and made higher than the heavens.” Heb.7:26. He has forgotten that Christ came into the world to get sinners save, which He said in Luke5:32 that “I came not to call the righteous, but sinners to repentance.”

Abioye has forgotten that Christ is never a politician and has nothing to do with politics. “When Jesus therefore perceived that they would come and take him by force, to make him a king, he departed again into a mountain himself alone.” John 6:15.

His sermon seeking to frighten and trouble the conscience of his followers has no basis in the Bible but from the pit of hell.

Olalekan Samuel who commented on Facebook said “Bishop Abioye, a man who was nothing besides helping Bishop Oyedepo to put fears in the minds of their gullible religious followers to swindle them of their hard earned monies. A man who cannot pray and the prayer be manifested, now thinks he can use hell to bully those whom God give freedom to exercise their democratic rights. Where was Abioye when Abacha almost ran Nigeria to the ground? Abioye get mind walahi.”

Adeoye Joseph added: “Bishop Abioye who quoted Yakub Gowon forgot to tell his church members that the de facto vice president of Gowon a Christian for 9 years was another Christian called Joseph Edet Akinwale. If the church members are that ignorant they can google it. For the records no single southern president was a Muslim. They should stop whipping religious sentiment.”

Bashir Usman wrote: “At first I was against Tinubu’s decision of picking Shettima as his VP but the way those people started bashing Islam and Muslims with curses make me start thinking of supporting Tinubu since they don’t excludes Islam and other Muslims.”

Ogunkoya OA added: ” This Pastor is receiving tithes from people working for Dangote, a Muslim. He is surely going to HEELL FIRE.”

Charles Kaye Oyoye wrote: “I hope Bishop Abioye has gone ahead to expand hell fire? I fear that the rooms in hell fire right now won’t be able to contain the millions of Nigerian Christians that will come after February. Anyway, he wants the video to go viral and I am doing as he commanded.”

Adunmo Muhydeen stated: “You can imagine a pastor preaching hate in the church, I don’t know when religion start to mixed with politics.. God of Asiwaju will shame you all.”

Nwachukwu May wrote: “Merchants of the gospel are deeply rooted in the falsities of religion. They commercialize emotions and trade fear to the people. The venture has to thrive by the fear factor of hell fire.

“How much of LOVE do one hear on the pulpit? These guys are divisive in their approach. They preach against other religions and denominations. They act as prophets of doom to project fear and false hope, that which is the opium of a desperate man.”
DiNwanyi CrossRiver added: “Not one place in the Bible does scriptures teach we defend our faith via our votes, rather it is preaching the wholesome GOSPEL OF JESUS CHRIST! Not one place does the scriptures say a man goes to hell for his political inclinations, men only go to hell because of Unbelief! Bishop Abioye goofed and Apostle Sulieman also goofed.”
Daramola Ife wrote: “In the last few days H. E Peter Obi met with Bishop David Oyedipo and Bishop David Abioye.
Bishop David Abioye gave a clear instruction as he backs Peter Obi.
“He advised Christians to only vote in favour of the church. He said “Any believer that sells out his vote in favour of party is heading for hell” By implication, Muslims should not vote for Christians candidates to avoid hell as well.
These people will set this country on fire. Do they really have the holy Ghost?”
Tags:   Bishop David Abioye